Recently Mozilla announced plans for a feature in Firefox 8 that will automatically block any add-ons that have been bundled into third-party software. Users will have to specifically approve each add-on through an in-browser alert that appears within Firefox. This security feature is an answer to the vast quantity of self-installed toolbars and nagging software additions that slow down the browser.

While Firefox 8 will help users keep malicious add-ons at bay, there is still no way to prevent add-ons from making unwanted changes to Firefox preferences without the knowledge of the users. In response to numerous complains on Mozilla add-ons review site, a new add-on was created. Called Preferences Monitor, this Firefox add-on watches for changes made to about:config preferences and notifies you of what was changed exactly. 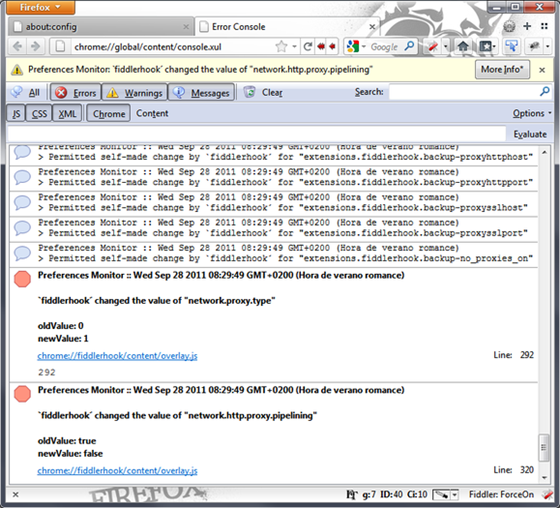 The extension developer describes three scenarios regarding the changes

All of them are notified through the ErrorConsole, while those of point 3 are notified via the yellow notification bar at the top of Firefox’s viewing window. Clicking on the ‘More info’ button opens the ErrorConsole where you can find the exact line of code where the change was invoked. This is useful only if you know how to read source code of the extension.

Preferences Monitor can only monitor Firefox preferences and alert you when changes are detected. It cannot prevent the changes from being made.

Additional features like for example the ability to revert the changes might be possible in future versions of the add-on.