There are several GPS navigation apps for Android, but almost all of them require a working data connection. While the GPS receiver built into your mobile device itself can work without internet, the maps over which your location is plotted needs to be downloaded. For those without a data plan or heading into locations where cell phone reception is sketchy, you need an offline solution.

Some GPS navigation apps allow loading of maps from an offline source, such as your memory card. You need to download maps using your computer and transfer them to your device and then you can use them without an internet connection. The following Android Apps support offline maps.

The apps listed above work both with and without an internet connection. Unfortunately, many of these rely on free maps offered by OpenStreetMap rather than Google Maps for mapping, and compared to Google Maps, OpenStreetMap is a very poor mapping system.

OpenStreetMap is a collaborative project to create a free editable map of the world, Wikipedia style. The maps are created by contributors using data from portable GPS devices, aerial photography, other free sources or simply from local knowledge. The map is unreliable as it based solely on contributions from amateur mappers and lacks many important landmarks, unless the place is some mega city like New York or London. 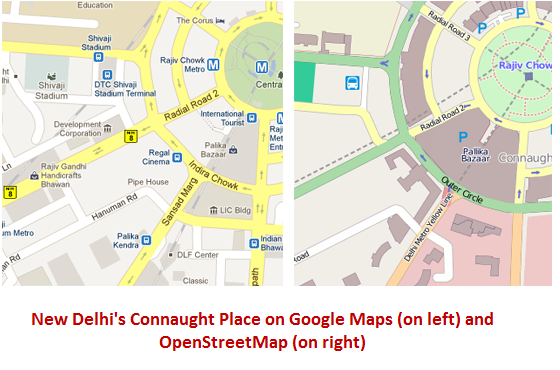 Propitiatory maps such as those offered by Google, Microsoft and Bing are sourced from NAVTEQ and Tele Atlas, two big mapping companies. They, in turn, have obtained some of this data from national mapping agencies such as the Ordnance Survey. All these organization have invested multi-million dollars in gathering this data using sophisticated technology. These maps are highly accurate and very precise.

Between Google, Microsoft and Bing and other sources, Google offers the best mapping service. This is because Google allows anybody to add landmarks around their location, and if enough users add the same landmark they start appearing on Google Maps. These results in detailed, high quality maps of every square kilometer around the globe.

Downloading Maps for use in GPS apps

Mobile Atlas Creator is an open source program which allows you to download and create offline maps for GPS handhelds and many cell phone applications for Android, Symbian and WindowsCE. Mobile Atlas Creator supports a large number of GPS apps and an equally large number of map sources including Google Maps, Microsoft Bing Maps, Yahoo Maps, Nokia/Ovi Maps and OpenStreetMap, among others. 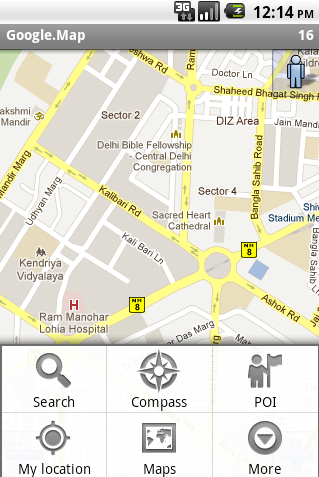 Download Mobile Atlas Creator version 1.7 from this page. Extract the contents of the archive into a folder. Depending on which edition of Windows you are using, open folder “Win x64 (64 bit)” or “Win x86 (32 bit)” and copy the file sqlite_jni.dll and paste it in the same directory as the executable of Mobile Atlas Creator.

Open Mobile Atlas Creator and select your map source, which will be Google Maps, but you are free to choose OpenStreetMap as well. Now using the following controls, select the area of the map you wish to download: 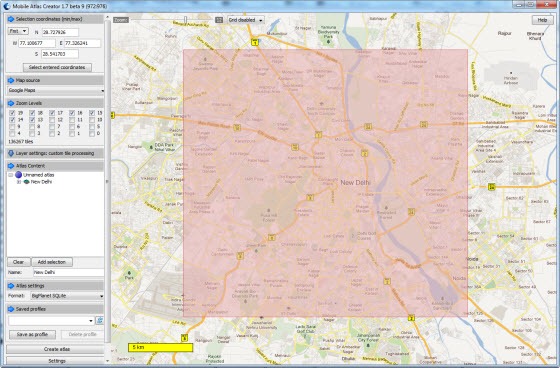 After you have chosen the area, select the zoom level. Level 18 is usually the highest available for non-US locations. Determine which is the highest zoom level on your location and select accordingly. If the highest available at your desired map location is 18, selecting level 19 is going to unnecessarily increase the download size without offering any better resolution. You can select multiple zoom levels if you plan to zoom in and out of the map. 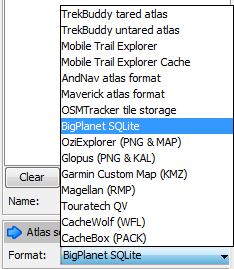 Specify the download directory under Settings and click the Create Atlas button. Wait for the program to finish downloading and preparing your atlas.

Once downloading is completed, connect your phone to your computer through the data cable and mount the SD card. Copy BigPlanet_maps.sqlitedb to /sdcard/rmaps/maps and disconnect USB.

Open RMaps on your phone. Press the Menu button and under More > Settings, touch or click on User defined maps. Enable BigPlanet_maps.sqlitedb.

You can now use RMaps for navigating around with GPS without an internet connection.