Tokyo-based company Burton Inc., has developed a technology called Aerial 3D that makes it possible to produce pictures in 3D in mid-air or underwater without using a screen. Aerial 3D is a "True 3D Display" which can produce bright dot in the air so audience can see 3D images in true 3D space, just like we saw in Star Wars and many Hollywood movies thereafter. Burton says their laser-based system is the only one of its kind.

Most current 3D devices project pictures onto a 2D screen, and make the pictures appear 3D through an optical illusion. But this device actually shows images in mid-air. 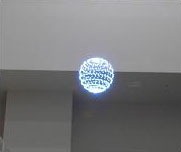 Instead of using a screen to cast the projected image, Aerial 3D works by focusing laser light to produce plasma excitation from the oxygen and nitrogen in the air. The current system can create about 50,000 dots per second, and its frame rate is currently about 10-15 fps. But they are working to improve the frame rate to 24-30 fps.

In this demonstration, to make the system more compact, a green laser is shone into water from below. But if a laser source with higher output is used, images can be displayed in air. A color display can also be achieved by using a combination of red, green, and blue lasers. It’s not exactly Star Wars quality yet, but a good start nonetheless.