In Windows XP and earlier it was possible to create independent toolbars from any folders and dock it to the screen edge. You right-click on the taskbar, create a new Toolbar and choose a folder. The contents of the folder would then become available on the new toolbar as shortcuts. The toolbar could then be moved out of the taskbar and assigned to any edge of the screen where it functioned as a dock and application launcher.

This feature was dropped from Windows Vista and Windows 7. While it is still possible to create new toolbars, they cannot be removed from the taskbar. Custom toolbars in Windows 7 behave more like menus than actual toolbars.

OldBar is a handy portable program that lets you create independent toolbars from any folders, just like it was in good old Windows XP. The detachable toolbars can be docked to the screen edges independent of the position of the taskbar.

To create a new toolbar, you just double click on the OldBar executable file. This will create a new blank toolbar. Right click on the toolbar and from the menu choose a toolbar folder. By default, the toolbar is attached to the top edge of the screen and the folder contents are shown by both icon and filename. The position of the toolbar can be changed by dragging and positioning it with the mouse or using the ‘Attach’ option from the right-click menu. To make the toolbar thinner, the filename can be hidden from the Settings dialog box. You can also adjust the width and height of the buttons/icons and rearrange or remove them from the toolbar.

If you don’t like the plain classic look, there are some other programs that provide similar functions.

WinExt is a free software for Windows that docks a horizontal launch bar to the top (or bottom) of the screen, much like the horizontal menu bar you find on the Gnome desktop. WinExt gives you access to your programs, folders, hard drive partitions and other areas of the operating system through menus and icons which can be placed on the bar. 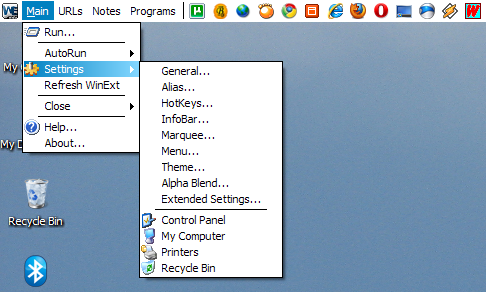 Quick Access Bar is a horizontal bar that docks to the top of the screen and gives access to the hard disk partitions, Control Panel, special folders like My documents, My pictures as well as custom folders