Online storage service Box.net is giving away 50 GB of free storage to all LG Android Smartphone users. If you have an LG phone, simply download Box.net Android app from the market and login to your Box.net account or signup for a new one. Your account will be immediately upgraded with 50 GB of storage space. The extra storage isn’t just limited to your mobile device, you get it anywhere you use your Box account, like on your laptop at home or your desktop at the office. 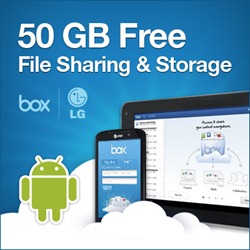 The company has also released a new version of Box.net app for Android that includes several highly requested features, such as the ability to download files from Box to your device. The app can now work in offline mode, which lets you access those downloaded files from your Box account even when you’re not connected to the Internet. In addition, with the new bulk upload capability you can easily get files, videos and photos into your Box account with minimal interaction with the phone.

Box.net had a similar campaign for iOS users in October where an equal amount of space was given to all who downloaded the Box.net app for your iPhone, iPad or iPod touch.

The LG promotion is valid till March 31, 2012. So you have plenty of time to signup and even get yourself a new LG phone.