Windows Installer Cache is located at C:WindowsInstaller and the folder is hidden by default to protect it against tampering or deletion. The Installer Cache can take significant amount of space on your hard drive, particularly if you have installed large software or large number of updates, and it might be tempting to delete the contents of the folder – considering they are just backup copies of installers. But Microsoft advises users against it.

The Installer Cache is used to store important files for applications installed using the MSI Windows Installer technology and should not be deleted manually. 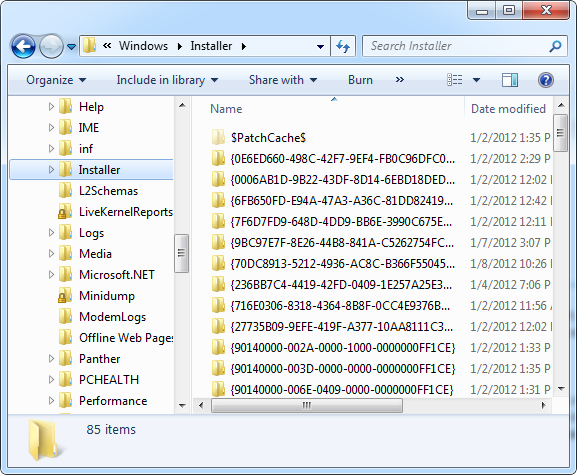 Any future update to the product relies on the information present in the Windows Installer Cache. Without this information, the new patch cannot perform the required installation. If the Windows Installer Cache is altered, it will cause serious problems that may require you to clean-up and reinstall the application and in some instances reinstalling the operating system.

Deleting the installer cache files doesn’t harm the installed applications which will continue to work as normal but the application cannot updated or repaired should the need arise.

Previously, Microsoft had offered a Windows Installer Cleanup Utility to fix problems arising from broken or partially installed Windows Installer (MSI) packages if the regular measures like uninstalling from Add/Remove Programs control panel have failed. Last year, Microsoft removed the tool from its Download Center as the program was found to damage other components of the Windows operating system. Instead, Microsoft now offers a safer command line utility Msizap.exe that removes either all Windows Installer information for a product or all products installed on a computer.

So as it stands, unless you have no intention to repair or update or reinstall applications installed using the MSI technology, do not delete Windows Installer Cache files.