Mozilla announced on Tuesday that they are working on a new Extended Support Release (ESR) version of Firefox that will be updated less frequently to keep pace with corporations whose technology doesn’t move at the speed at which the web does. The ESR version of Firefox is targeted towards enterprises, public institutions, universities and other organizations that centrally manage their Firefox deployments. Releases of the ESR will occur once a year, unlike the standard version of the browser that takes place every six weeks, providing these organizations with a version of Firefox that receives security updates but does not make changes to the Web or Firefox Add-ons platform. 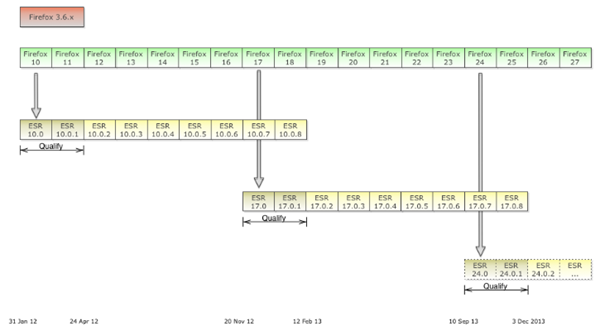 Mozilla’s rapid update schedule has drawn flak from corporations and business organization which aren’t equipped to handle the changes at that pace. Deploying a new version of a browser throughout an entire organization that consist of hundreds to thousands of networked computers require time. And it doesn’t end at deployment. The browser needs to be tested in many thousands of internal business web applications and in-house Web sites that uses it. Add-on compatibility adds another burden for administrators.

In order to accommodate the slower-moving customers the company has decided to branch out Firefox development into two separate forks – one for web users, which will be updated every 6 weeks as before, and another for enterprises that will be updated only once a year.

Mozilla is committed to providing the best Web experience for people everywhere, and our goal for the Firefox ESR is to make it simpler for companies, public institutions, organizations, and institutions that manage their desktops to deploy Firefox in those environments. Over the last few months we received great feedback on the initial proposal from the Mozilla community and strongly believe that the ESR meets that goal.

Specifics about the new version are posted as Mozilla Wiki.