BSNL, the state-owned telecom giant, announced on Friday that it would bring three Android tablets in partnership with Pantel, a company based in Noida. Of the three, the cheapest one TPAD IS701R is priced at just Rs. 3,250 -  a few hundred rupees more than the commercial version of Aakash tablet with better configuration. 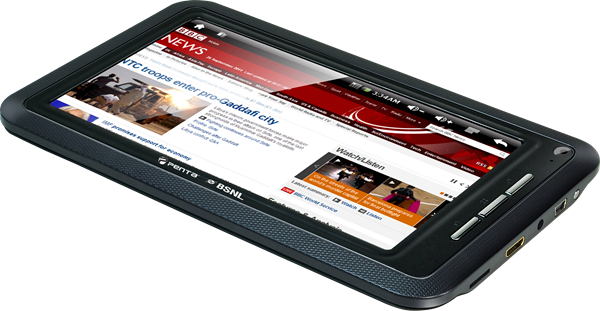 The Penta TPAD IS701R features a 7 inches resistive touchscreen, powered by a 1 GHz processor, 256 MB RAM and 2GB of Flash memory that can be increased up to 32 GB via memory card. The tablet has Wi-Fi connectivity, 3G dongle support, accelerometer, HDMI port and a camera on the front. The tablet will be sold along with special data plans and 3G services from BSNL. The low cost tablet will appeal to Aakash fans who are still waiting for their devices. Penta, on the other hand, expects to start shipping by the first week of next month. It remains to be seen whether they can keep up with the dates.

The Penta TPAD WS704C features 7 inches capacitive touchscreen along with 1 GHz processor, 512 MB RAM, and 4GB internal memory expandable up to 32 GB. Along with Wi-Fi and 3G dongle support, this tablet will also carry a SIM card slot, GPS, Accelerometer, Bluetooth and two cameras one each at the front and rear. This tablet is priced at Rs 10,999

The third tablet, Penta TPAD WS802C has an 7 inches capacitive touchscreen with 1.2 GHz processor, 512 MB RAM, and 4GB internal memory expandable up to 32 GB, other features being same as TPAD WS704C. This tablet is priced at Rs 13,500.

You can pre-book your tablets on this page.

[via Times of India]