Fluent is a a new web-based email client created by three ex-Google employees that turns your Gmail inbox into Facebook styled newsfeed. Fluent allows instant searching through emails as you type, shows attachments like photos in a slide show and lets you manage multiple accounts under one log-in.

The one thing Fluent aims to change about email is presenting it in a stream that lets one act on items as quickly as possible. Rather than presenting the inbox as rows upon rows of message subject, emails are presented as threads, with the subject and a snippet of the message displayed first. A “more” link you click to display the body of the email. Replies are shown just like comments on Facebook. 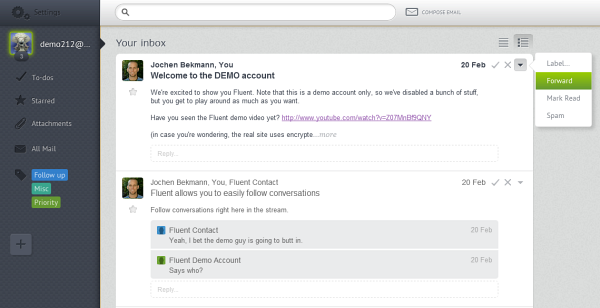 Additional buttons to forward message, add label, mark as spam etc. are available from a small menu. Fluent also introduces a new action – to-do. This allows you to mark messages that require an action from you, such as a reply, and then optionally set time-based reminders.

Other features of Fluent include letting users quickly browse attachments such as images in a slide show format, the ability to search for emails as one types – something Google’s search engine pioneered with "Instant Search" but is not available in Gmail – and the ability to pinpoint emails one has sent to a specified email address on a timeline.

Fluent is in private beta but a demo is available on the website. The basic email experience will be offered for free or maybe for a small fee, and special features that went beyond standard email, such as offering document collaboration, file-sharing and integration with services such as Dropbox, Evernote and Google Docs will be offered in premium versions.

Fluent currently works with only Gmail. More email services, such as Hotmail, are planned in the future.