Scheduling emails so that it gets to the recipient at the right time is important, particularly if you are mailing busy people. But email isn’t supposed to be a real-time conversation, you may ask, so why is timing important? Let me explain. For someone who receives hundreds of emails each day, it is easy for important messages to get buried below tons of mails from people who are eager to initiate a conversation with the person. If the person lives on the other side of the globe and you mailed him while he was sleeping, the next morning he wouldn’t see your message because several new mails will have arrived during the night pushing your mail out of the screen and into several pages deep. But if you email him while he is on his desk, there is a good chance that he will see your message. And that means scheduling your email so that it hits his inbox at the right time.

Gmail doesn’t have an email scheduling feature, but this functionality is offered by a third party service called Boomerang for Gmail which has been in service for the past few years. There is a new service now called Right Inbox that offers this function. 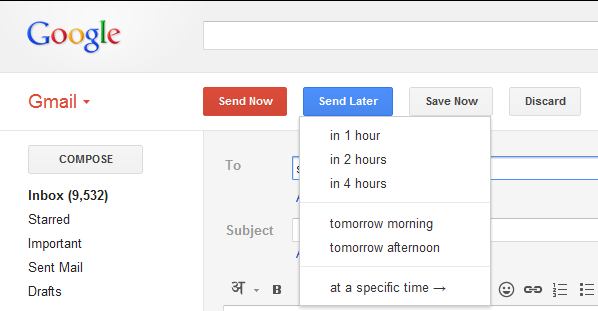 Right Inbox is an extension available for Chrome and Firefox that allows Gmail users to send emails at a specified time at a later date. It appears as a button next to the Send button on Gmail’s interface. Clicking on it reveals a menu with options to send the mail after 1 hour, 2 hour, 4 hour, tomorrow morning, tomorrow afternoon or at a user specific time.

The emails are sent based on your own timezone, but there is also an option to send an email based on another timezone which is extremely handy if you’re corresponding with someone who lives overseas – the timezone problem I discussed earlier.

Users who have had experience with Boomerang will notice the similarity between the menus of the two services. Unlike Boomerang, however, Right Inbox is simple and offers only scheduling. No reminders for messages that no one replied or options to bounce an email back to the top of the inbox at another time and other advanced features offered by Boomerang.

But Right Inbox is free, at least, for the time being. The developers have hinted that a pricing model will soon be introduced once the app is out of beta. Maybe then we will start seeing more features beyond very basic scheduling.