Markdown is a lightweight markup language that allows users to write in plain text format using easy to write markup, and then convert it to structurally valid XHTML or HTML. Simply put it’s a text-to-HTML conversion tool for web coders.

Let’s face it, writing HTML in a text editor isn’t the most efficient way to create webpages. It requires lot of effort and time, and all it takes is an accidentally misplaced closing tag to mess up the whole document. WYSIWYG editors rather than solving the problem further aggravates it by being too helpful with HTML tags essentially destroying your formatting. True, today’s HTML editors are smarter than what they were a few years ago (Microsoft Frontpage) but they still have a long way to go before they can start producing code like humans.

Markdown allows web programmers to write HTML code without having to worry about markup. It uses simple markups or syntaxes that are easy to write. For example the header tags <h1>, <h2> etc. simply becomes #, ## and so on. <blockquote> becomes > and lists have a simple * in the beginning. Most importantly, you don’t have to worry about the closing tag.

Here is a typical piece of HTML code. 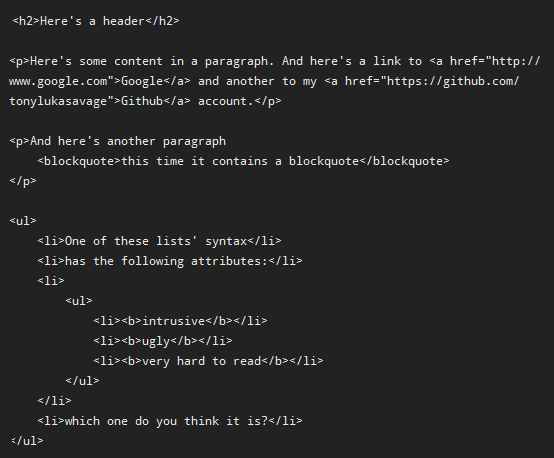 And here is the Markdown version of the same code. 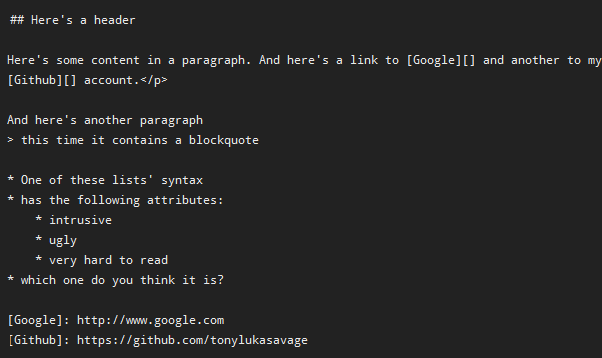 So now that you know what Markdown is, let us look at 2 free Markdown editors that lets you write in Markdown syntax and get output in HTML. 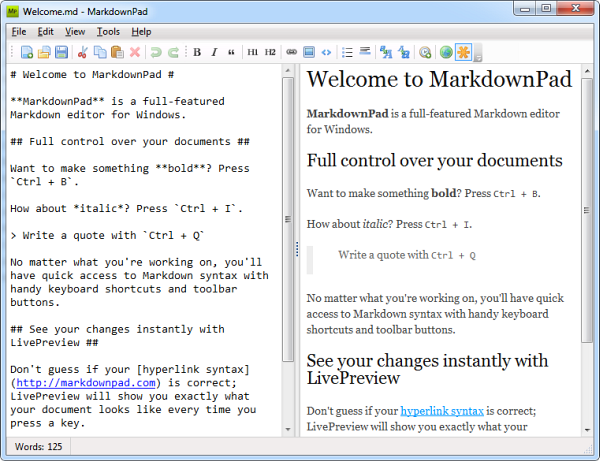 MarkdownPad is one of the best known Markdown editor for Windows. The code writing area is split vertically into a left and right panel. You type your document on the left panel using Markup syntax and the preview is displayed instantly on the left. Markdown formatting can be applied with handy keyboard shortcuts and toolbar buttons. Documents can be quickly converted to HTML by using the Copy to HTML command from the menus. You can also fully customize the style sheet. 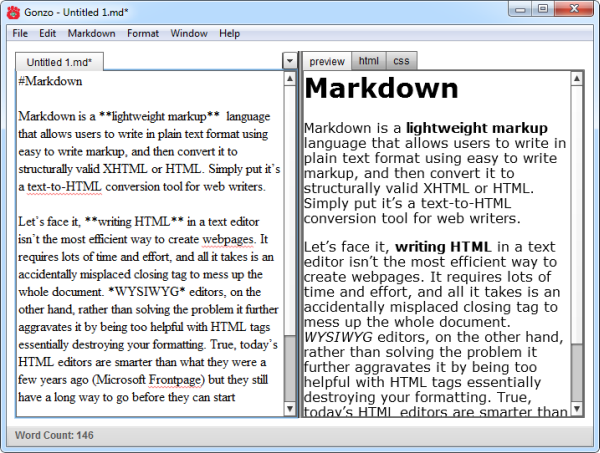 Gonzo is a lightweight, open source markdown editor written for Adobe Air. Being based on Adobe Air makes Gonzo not just limited to the Windows platform; it runs on Linux and Mac OSX too.

Like MarkdownPad, Gonzo features a split-panel interface – you type your document on the left and see real time preview on the right. Unlike MarkdownPad, you can actually see the HTML markup as you type. Unfortunately, the HTML view is not editable and thus you cannot make make corrections/editions on it.

You can create markup using keyboard shortcuts or from the menu. Watch out for the shortcuts though, as they aren’t the universal editing shortcuts. For example, CTRL+I will not italicize text but insert image.