Photoshop Senior Product Manager Bryan O’Neil Hughes gave viewers a glimpse into Adobe Photoshop CS6’s Camera Raw tools. The most dramatic change that you will notice from this video is the darker color of the new interface which Hughes explains was chosen to make Photoshop consistent in appearance with some of Adobe’s other products like Lightroom. Users will however be able to change back to the lighter classic color if they want to.

The second video demonstration by Product Manager Zorana Gee is actually more interesting. Photoshop CS6 will be able to use your computer hardware to boost image processing speed. She demonstrated this with the Liquify tool. When she fired up the Liquify tool with the current Photoshop CS5 to edit a 100MB image, the image opened gradually broken up into tiles like on a poor Internet connection. She also showed that the brush size couldn’t go beyond 1,500 pixels. Then when she tried to use the brush, there was a big lag between her strokes and the results.

In CS6, she performed the same steps with ease. The image opened immediately in the Liquify filter, the brush size went beyond 14,000 pixels, and editing was real time without any lag.

It’s not clear whether the GPU acceleration applies to other tools or limited to a few.

Another great new feature is background save. Photoshop CS6 will allow user to save a picture and while the saving process is in progress, users will be able to work on another picture. This is useful when you are saving a large file of several hundred megabytes in size.

Last year, at Adobe MAX 2011, the company demoed a video of a new Photoshop tool that can magically correct shaky and blurry images.

Currently, the most practical use case for the deblur technology is for image forensics – when an investigator needs to deblur an image enough to read some text like a phone number or license plate. For example, you can see how well the prototype deblurs the text in the image below. 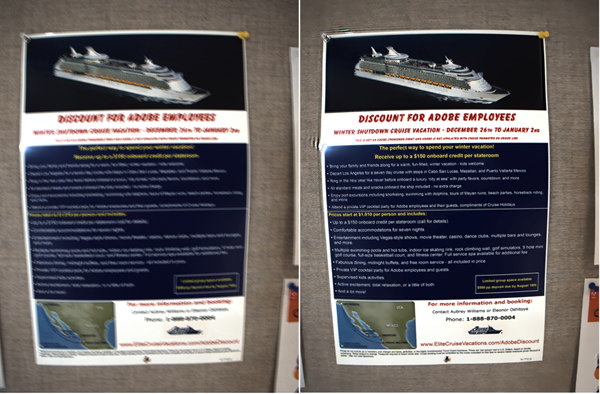 In yet another demo at Adobe MAX 2011, Jon Brandt showed us a sneak peek of a potential new feature for searching through a large library of images by identifying images that contain the same people, backgrounds, landmarks, etc.

AppleInsider has a more detailed preview of various new tools and features as seen in an early build of Photoshop CS6. As work on Photoshop CS6 progresses, expect to see more new previews from Adobe.