Autodesk has released two new free software titled 123D Catch and 123D Make that gives just about anyone the ability to not only create their own 3D models on computer but to also produce them as real, physical model. With 123D Catch, a user photograph a real-world object using a digital camera from different perspectives and convert it into a 3D model of the object. Then with 123D Make, the user can take that 3D model and convert it into something that they can hold in your hands.

The software makes this possible by turning any 3D model into a pattern of flat parts that can be cut out of cardboard, wood, plastic or aluminum and assembled at home. The principal is the same as in any 3D printing where three-dimensional objects are created through additive, layer-by-layer process. The difference is that with a 3D printer the process is automatic and seamless, whereas with Autodesk 123D you have to do the cutting and pasting by self. If that sounds too much work for you, then for an additional fee, Autodesk will have your model created and delivered at your doorstep. 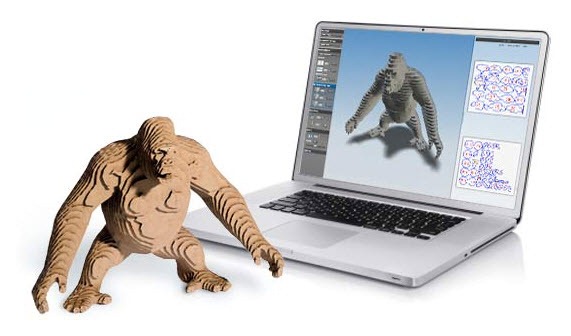 What you do first is capture lots of images of the object you are planning to model. Ideally, you should take pictures from all angles by walking around the object and changing position from high to low as well. The more the number of pictures the better. I’m talking in the range of 3 dozen or more with no duplicate angles. Once you’ve captured the images, you upload them to Autodesk’s servers via the software where the 3D model will be constructed. Some 10 to 20 minutes later, depending on the complexity of the object, the model will be downloaded back to the software for viewing. The model can then be exported as an .OBJ, .RZI, .IPM, .LAS. or .DWG file. 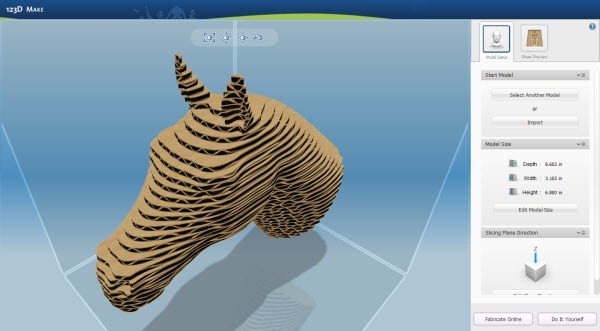 The second program 123D Make lets you convert the digital 3D model into 2D cut patterns that can be easily assembled in low-cost materials, such as cardboard, wood, fabric, metal or plastic. Users can manipulate their 3D model and see on the screen the schematics of the 2D cut-outs that will be physically printed. Users can either print the schematics on paper themselves or carve them out of cardboard or wood, or pay Autodesk to create the cut-outs. Autodesk expects users to take advantage of 123D Make to create art, furniture, sculptures or other quick prototypes in order to test how a design will look in real life.

Watch the promotional videos below.