Animated GIFs developed a gorgeous offshoot in the form of cinemagraphs, made popular by New York City-based fashion photographer Jamie Beck. Instead of looping or repeating a short animation or video like normal GIFs, cinemagraphs isolate a particular part of the video while leaving the rest static like a photograph. Cinemagraphs became immensely popular, but to pull it off successfully requires serious Photoshop editing skills. Now, thanks to Microsoft Research, creating your own cinemagraphs is within reach.

Microsoft Research released a new free software called Cliplets that allows people to put together photos and videos creating content in which the focus remains on what was intended to be captured in the first place. 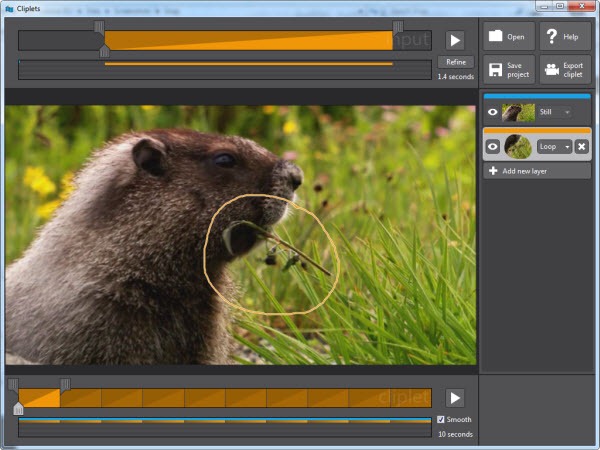 A still photograph is a limited format for capturing a moment in time. Video is the traditional method for recording durations of time, but the subjective "moment" that one desires to capture is often lost in the chaos of shaky camerawork, irrelevant background clutter, and noise that dominates most casually recorded video clips.

Microsoft Research Cliplets is an interactive app that uses semi-automated methods to give users the power to create "Cliplets" — a type of imagery that sits between stills and video from handheld videos. The app provides a creative lens one can use to focus on important aspects of a moment by mixing static and dynamic elements from a video clip.

Essentially, Cliplets allows you to take a snippet of video around 10 seconds in length and freeze certain parts of the frame, while allowing others to continue playing. The result is this really cool "photo" that blends the best qualities of still and dynamic imagery.

For instance, you may want to capture a video of a waterfall, but the camera is shaking and people are walking behind the waterfall causing a distraction. Using Clippets you can isolate the waterfall and make it play in a loop while freezing the rest of the frame.

You can see a demo of Cliplets in action below.