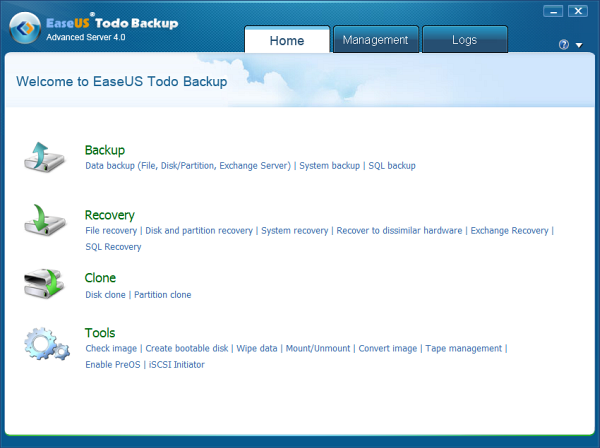 The program’s interface is the same as in EaseUS Todo Backup Free. All available functions are split into 4 main categories – Backup, Recovery, Clone and Tools. Additional tools to manage previously created images are located under the “Management” tab at the top of the program window.

The File backup function will backup selected files and folders to the backup destination of choice, which can be local disks, network connected disks, FTP server or legacy storage media such as magnetic tapes. Todo Backup Advanced Server can also backup databases from Exchange Server 2003, 2007 and 2010 and SQL Server 2000, 2005, 2008 and 2008 R2. 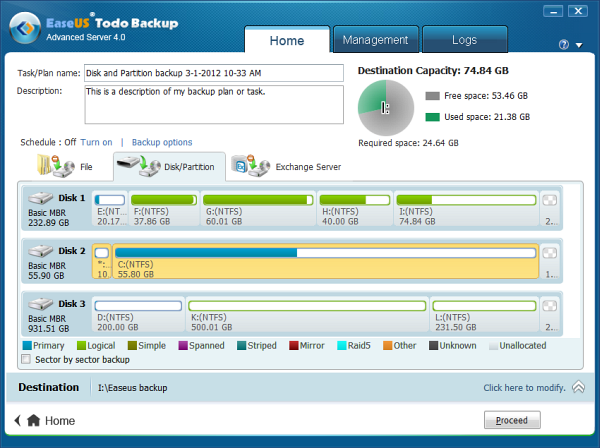 Aside from file backup, Todo Backup Advanced Server also performs full disk and partition image backup. The partition can be regular volumes, dynamic volume or GPT disk. If the disk is an SSD, Todo Backup is capable of ensuring sector alignment during the backup process.

Backups can be full, incremental or differential. They can be run manually when needed or scheduled to run at a desired time of day, or during certain events like system startup/shutdown and user log on/logout. Notification on the result of the backup job can be configured to automatically emailed to multiple email addresses.

When performing a recovery operation, it is possible to selectively recover files and folders from a backup. For disk images containing more than one partition, users can select the partitions to recover. The program even allows users to recover a partition to a different computer. When restoring a system partition to another computer with dissimilar hardware configuration, the program will lets users install drivers for the new hardware during the recovery process. 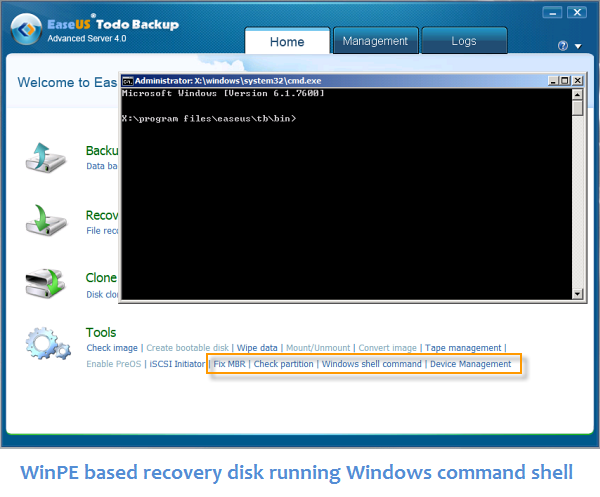 Todo Backup Advanced Server also offers a disk-less recovery option, wherein the computer is restarted and automatically goes into the recovery mode without having to boot it off a recovery disk. And yet another way to get rid of optical disks (and drives) is to create a USB recovery drive, which is possible through this program.

The application comes with comprehensive backup management features that automatically removes old backups with an option to keep the first backup and any number of recent backup. Users can split back images to smaller sizes so that they can be efficiently transferred to another location. Disk images can be mounted as a virtual drive and their contents browsed, or the images can be converted into VirtualPC and VMWare format and mounted with the respective software.

How exactly is the Free edition different from the Advanced Server edition?

EaseUS Todo Backup Advanced Server is priced at $299. Thanks to Vanessa from EaseUS, we have 5 copies of this software to giveaway to our readers. If you are interested in entering the sweepstake, leave your name and email ID in the form below. Winners will be selected by a random draw. The contest closes on 5 March, 2012.