There is still hope for wristwatches. Allerta Inc. has developed a new gadget that can not only stave off the demise of this time device, but can to stop it altogether and even revert it. Their invention: inPulse, a watch that couples with a Blackberry or Android smartphone acting as a secondary display on which you can receive push notification, read emails, chat messages, check weather and more.

inPulse is powered by a 52Mhz ARM7 processor and 8Kb of RAM and carries a display of 1.3 inch across with a resolution of 96 x 128 pixels. No, you can’t play Angry Birds but you can sure read your emails. At $149, it’s costly for a wristwatch, but this is no ordinary watch. 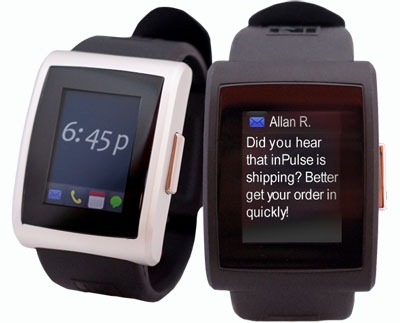 Out of the box, the inPulse smartphone app lets you push emails, SMS, calendar alerts and caller ID. You can customize fonts and colors, set filtering options for emails and manage notification/vibration profiles.

The creators have also released an SDK so that developers can create more apps to run on the watch.

Some programmers are already using the new Allerta. One app offers the ability to control an iTunes music library from the watch. Another becomes an extension of a Blackberry smartphone and shows new e-mail messages and calendars on the phone through the watch’s display.