Pneumatic Tubes File Router is a free program that lets Windows users move files from one folder to another. The program derives its name from the 19th century invention called Pneumatic Tube Transport – a network of pipes through which solid objects were transported over relatively short distances such as within a building, by using compressed air as means of propulsion. In some European countries, Pneumatic tubes were in use as late as the end of the 20th century. While Pneumatic tubes transported mails and documents within a bank or post office, Pneumatic Tubes File Router move files and folders within a hard drive or between hard drives in a system.

You begin by creating a “tube” which is nothing but the path to the destination folder. You can also configure a single-key keyboard shortcut, and an icon for the “tube”. Multiple tubes can be created for multiple destination and they appear inside the program’s window with the icon of your choice. To move a file or folder through the tube, simply drag and drop it on the tube’s icon. 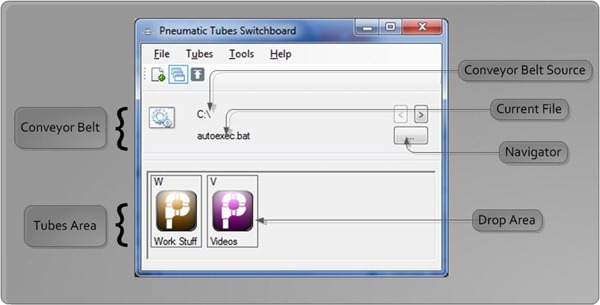 Another way to move files is by using the “conveyor belt”. The belt appears above the tubes and displays the contents of the source folder one item at a time. You can move files to the desired destination by dragging them from the belt and dropping it into the appropriate tube. This is the same as dragging and dropping files from Windows explorer to Pneumatic Tubes File Router. The utility of the conveyor belt is that you don’t have to have an Explorer window open. However, had conveyor belt displayed more than one file at a time it would have been more useful.

The true utility of Pneumatic Tubes File Router can only be realized when you are moving files from the source directory to multiple destinations. I can definitely see myself using this when I perform file sorting the next time.