Mozilla announced last week the availability of the development build of Thunderbird 14. The last stable build of the open source email program is 11 and was released just this weekend. While Thunderbird 11 brings only a minor interface overhaul and a couple of bug fixes, version 14 promises to be a big one. The most recent nightly builds of Thunderbird 14 has “powerful instant messaging capabilities, thanks to a major code check-in which integrates Instantbird capabilities to Thunderbird’s”. In short, you get a major functionality of Mozilla’s instant messaging program Instantbird in Thunderbird itself. This means email, Twitter, Facebook, Google talk, IRC and possibly more – all under the same roof.

Instantbird is a Mozilla technologies powered instant messaging application that integrates ICQ, AIM, Yahoo!, MSN Live, Google Talks and other Jabber based networks, Twitter and Facebook Chat, all in the same application.

On Thunderbird, integration is coming in a new tab where all your accounts come together. Not all services are supported yet. Only Facebook, Twitter, Google Talk and IRC are supported, and it is not clear if other services will follow. 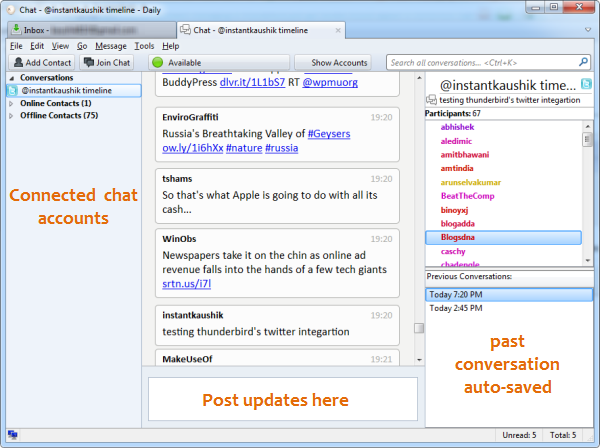 You can download the daily build from Mozilla’s FTP servers and start chatting right away. You might encounter a few hiccups on the way, like not being able to authenticate Twitter and Facebook rejecting your login. Here is how to get around these problems.

Facebook username is an optional feature. It’s not clear if and how Thunderbird will allow users who don’t have a username to login to Facebook chat. 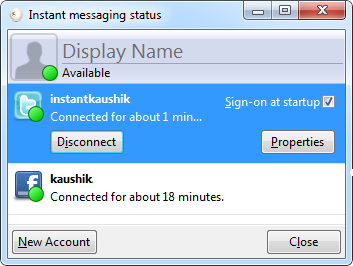 As far as Twitter authentication failure is concerned, it’s probably just some bug. If you find yourself stuck on the authentication screen, simply close the window and try to connect to your Twitter account again. You will probably get through the second time. Twitter integration lacks some core features like the inability to send direct messages or read messages sent to you by fellow Twitters. But you can post status updates and communicate using the @ sign.

One interesting feature is that Thunderbird automatically saves all your sessions, whether you are connected to Facebook or Twitter. If you logged into Twitter at 9AM and then again at 12PM, you can still view your timeline as it was at 9AM. So you can leisurely browse your timeline later.

Keep in mind, this is a development build so there are still a lot to come.