Symantec, the company behind Norton Antivirus, has released a new password manager called Identity Safe, that aims to relieve you from the burden of remembering passwords of your online accounts and ensuring password security at the same time. If you use Norton Internet Security or Norton 360 then you already have Identity Safe installed. But now Norton Identity Safe is available as a standalone product that aims to rival tools such as 1Password, KeePass and LastPass. And unlike some of these services, Norton Identity Safe works across Windows, iOS, and Android devices. It also supports all the major browsers including Chrome, Firefox, Opera, Safari, and Internet Explorer.

When you install Norton Identity Safe, it automatically installs plug-ins for all browsers but you may need to turn them on from your browser settings. Identity Safe can import passwords stored in Internet Explorer, and turn off the default password management in IE and Firefox. Disappointingly, it can’t import password from third-party password managers such as KeePass or LastPass. This is one drawback that might just hold back users who are already using these tools from trying out Norton Identity Safe. Nobody wants to start from scratch.

There is an option to import passwords from CSV files, but I haven’t found out if that works.

Anyways, feature-wise it stacks up pretty good against these services. Identity Safe stores all your password on the cloud that can be accessed from any device, thanks to the program’s cross-platform compatibility. The password vault itself is secured by two logins: first, you have to login to your Norton account and then use a separate password to open the vault. Norton has imposed strict restrictions on the choice of passwords. It rejects any password that doesn’t contain a mixture of uppercase and lowercase characters, numbers and symbols. The passwords is also irrecoverable. 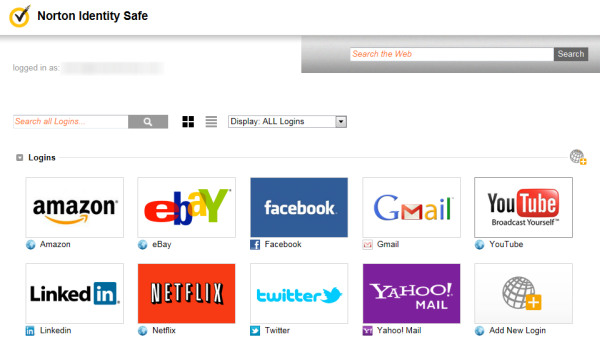 Once you’ve overcome this hurdle and setup both your account and vault, you can start storing your usernames and password. When you open a website and enter your login credential, Identity Safe will  automatically save your login information and then fill in the login forms whenever you visit the site later. You can also manually create new Logins and organize them in folders.

Save for a browser toolbar and unobtrusive notifications, Norton Identity Safe mostly stays out of the way.

Aside from password management, Norton Identity Safe also brings safe sharing of URLs through email and social networks, as well as warn users when they try to visit infected websites.

Norton Identity Safe is available for free download until October 1, 2012.