In the announcement, Opera said that when extensions were added to the Presto engine back in 2010, “a lot of time was spent behind the scenes so as to make our extensions framework very versatile and lightweight”. Although initially extension was targeted for desktop only, every aspect of the extensions API was drafted with mobile in mind. However, they quickly added that “it’s not quite certain at this point that extensions functionality will effectively make it into a future release of Opera Mobile”. Even if extensions doesn’t make it to the final build, the Labs build supporting extensions is likely to be around. So it’s not as bad as it sounds. 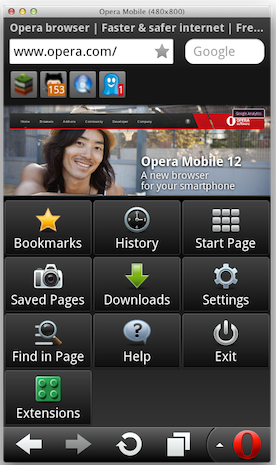 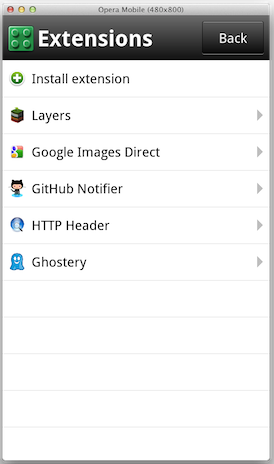 Once you’ve downloaded a build, head over to the Opera Extensions site where you’ll find plenty of extensions to play with. If you already use Opera desktop, why not try out your favorite Opera extensions on your mobile browser?

When doing so, please keep in mind that Speed Dial extensions are not supported. Extensions relying on keyboard shortcuts and/or mouse events might also not work as expected.

Another limitation is that in Opera Mobile, popup windows are currently launched as a new tab, which limits their functionality.

Some of the extensions like Ghostery, Layers, Google Images Direct, HTTP Header, LastPass are found to work quite well. Many users will be delighted to see LastPass in the list.

You can find all installed extensions by clicking the green Extensions icon in the Opera Menu, from where you can disable or uninstall them, and tweak various settings. Furthermore, the Install extension menu option allows you to sideload extensions from the local file system as well.