The Fn or ‘Function’ is a modifier key found on laptop keyboards to assign additional actions to the Function keys (F1, F2 etc.). In function, it is similar to the Shift, Ctrl and Alt keys, but found only on laptops. It is mainly used for the purpose of changing display or audio settings quickly, such as brightness, contrast, or volume, and is held down in conjunction with the appropriate key to change the settings. On full sized desktop keyboards these multimedia keys are usually kept separate. But on laptops, since multimedia keys are difficult to fit on the chassis, the Fn key is used instead.

Some laptops also feature a Fn Lock key. Pressing the Fn Lock key once will turn “ON” the Fn key so that you can access these actions directly by pressing the F keys without having to keep the Fn key pressed. This is useful when you don’t want to use two hands or have small hands that can’t reach both keys at the same time. Unfortunately, not many laptop manufacturer include the Fn-Lock key. If your laptop lacks one, here is a replacement.

SFunKey is a free program that replaces the F keys with actions of your choice. Most of the supported actions are multimedia based such as adjust screen brightness, audio volume, pause/play media, play next track etc. There are a few additional actions like turn off computer, restart, log-off, open task manager, and open file or folder. When SFunKey is enabled, you can access these actions directly by pressing the F keys without pressing the Fn key. Only key presses that are longer than 1000ms are accepted which means that you can continue to access the default Function keys action as before using short key presses. 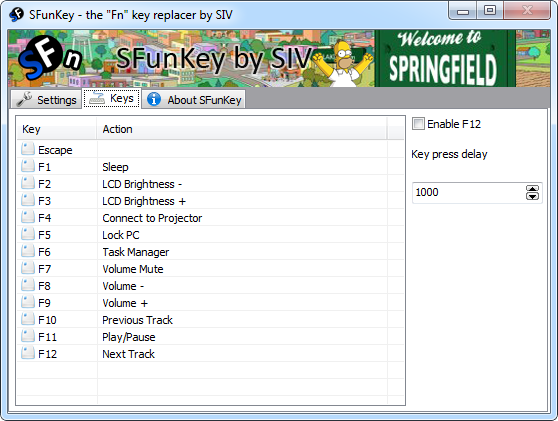 Keep in mind that SFunKey only remaps the F keys; it’s not a Fn key enabler. SFunKey cannot make your laptop’s F keys access the default Fn+F-key combination. For instance, you will not be able to turn on/off your wireless adapter or touchpad because these actions are not supported by SFunKey.

To use SFunKey, open the program and double click on the icon on the system tray to remap the F keys. You can also enable on-screen-displays when you use these functions.