On the 15th April 1912, exactly 100 years ago, the RMS Titanic sank in the North Atlantic Ocean after colliding with an iceberg during its maiden voyage from Southampton, England to New York City. The sinking of Titanic caused the deaths of 1,514 people including some of the wealthiest people in the world. It was the largest ship afloat at the time of its maiden voyage. The story has been written into history books, made into movies and is memorialized around the world in museums and monuments. Now, despite its depth on the sea floor, you can explore this ill-fated ship from the comfort of your home using Google Earth.

Using imagery from National Geographic, the Google Earth team has created an updated 3D model of the Titanic. You can explore different parts of the ship, from prow to stern by simply searching for “Titanic” in the Google Earth search box. 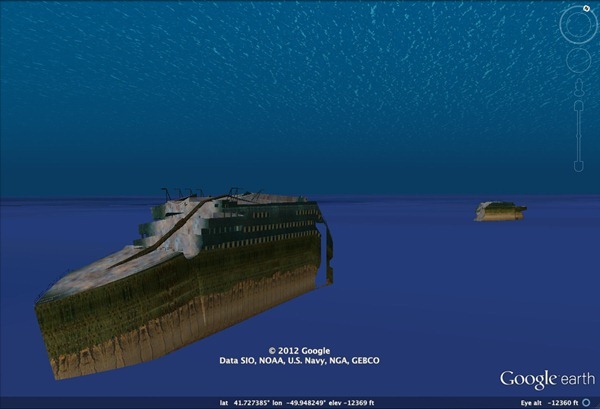 You can also join a guided expedition by diving into the new Titanic KML tour along featured in their Earth Gallery. This tour showcases images and video of the Titanic provided by NOAA and the National Geographic. Watch the video below to dive down to the Titanic in Google Earth, written in collaboration with Jim Delgado, Director of Maritime Heritage with NOAA’s Office of National Marine Sanctuaries.