The White House routinely organize tours for visitors, but getting into the building requires some planning and about a month of waiting. If you aren’t able to get a ticket for the tour, Google has made an arrangement by bringing you the White House through its Street View cameras. President Obama and first lady Michelle Obama announced this morning that the White House has been added to the Google Art Project as part of an effort to make the president’s house more accessible.

The White House tour is a part of the Google Art Project, launched in March last year, which offers virtual tours of major museums throughout the world. 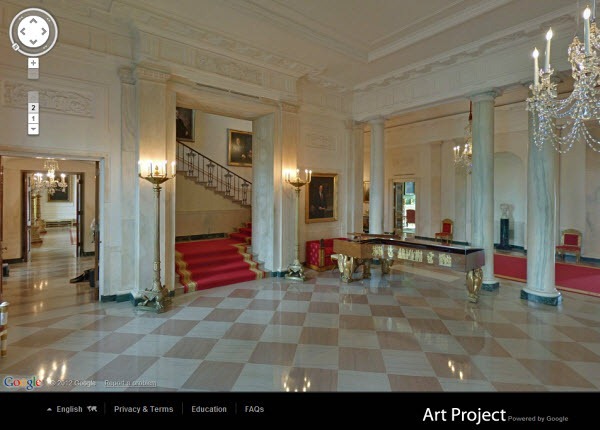 "The White House isn’t simply a home to first families or meeting space for world leaders, it’s also known as ‘The People’s House,’ a place that should be open to everyone. And that’s why we’ve made it a priority to invite young people, military families, and Americans of all ages to join us here at the White House," Mrs. Obama says in a video for the Google Art Project.

"Thousands of people have walked these halls and gazed at the artwork," Mrs. Obama says. "They’ve examined the portraits of Washington, Lincoln and Kennedy. They’ve imagined the history that’s unfolded here. And now you can do all of that without leaving your home. So go ahead, look around, enjoy the history and the beauty of these rooms. Because after all, this is your house, too."

Along with the White House, Google has added several new exhibits including the Museum of Islamic Art in Qatar and the National Gallery of Modern Art, Delhi. The original Art Project counted 17 museums in nine countries and 1,000 images, almost all paintings from Western masters. Today, the Art Project includes more than 30,000 high-resolution artworks, with Street View images for 46 museums, with more on the way.