There are many ways to create bootable USB drives containing a Live operating system or the setup files of an operating system such as Windows or one of the many variants of Linux. Two of my favorite bootable USB creator are YUMI and UNETBootin. YUMI is particularly interesting because is allows you to load multiple ISO images into the USB drive making it possible to create a multi-boot drive. Both these tools use GRUB as the bootloader. Now if you have a particular dislike for Linux bootloaders, it is pretty much dead end because there is no tool that uses Windows 7 bootloader aside from Microsoft’s Windows 7 USB/DVD Download tool that is specifically for creating USB installers for Windows 7 and Windows 8. But now, you have a choice.

WiNToBootic is a new bootable USB creator that chose to incorporate Windows 7 bootloader rather than GRUB. Simply fire the program and drag and drop the ISO disk image into the placeholder. Choose the USB drive from the list, in case there are multiple ones connected, and click on the “Do it” button. 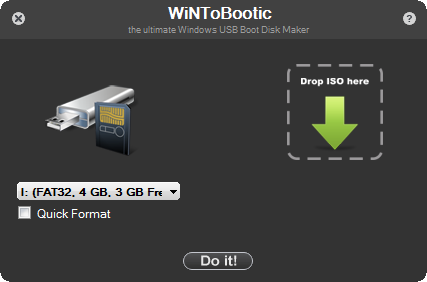 WiNToBootic supports ISO 9660 (Joliet), ISO 13346 (UDF) and ISO: Windows 7/8/2008/Vista/PE2/PE3. Unfortunately, ISO disk image of Windows XP is not supported. I didn’t try to experiment with a Linux distribution ISO because I guess it doesn’t make sense to use a Windows 7 Bootloader based USB drive to install Linux.

The product page says NTFS based USB disk, but I can only see FAT32. This might cause problems if the size of the ISO file is larger than 4GB. For now, all Windows 7 and Windows 8 ISO images are less than 4GB, but this might not be in future.