After more than three years of development, GIMP 2.8 is finally available for download. The new version brings the long-awaited single-window mode, as well as several improvements like layer grouping, on-canvas text editing, multi-column dock windows, a new set of brushes and many other features. 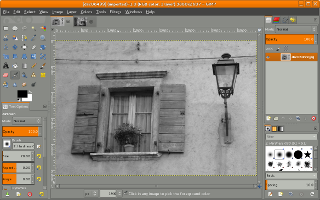 GIMP 2.8 has also added multi-column dock windows, that allows multi-monitor users to have to have a big dock window with all the dialogs and the tools on one monitor, while all images are on other displays. The docking bars have been removed and replaced with overlaid highlights. An automatic tab style automatically which makes dockable tabs use the available space.

Another big change is layer organization. With GIMP 2.8 you can organize layers into groups in a tree-like structures. Similarly, it is now possible to tag GIMP resources such as brushes and patterns to group them. The tagging is performed from the respective dockables e.g. the Brushes dockable, and it is possible to filter resources based on these tags.

When you are adding text into your images it is now possible to edit text directly on the canvas without the need to turn to a separate window. The brush dynamics engine has been expanded considerably, making almost all aspects of the brush engine drivable by a multitude of inputs, all of them configurable with their own response curve. Saving and exporting images are now separated activities. Saving an image can only be done in the XCF format which is GIMP’s native file format, able to save all kinds of information necessary for works in progress. To save an image as JPEG or other universal image format, you have to use the Export feature.

If you have tried GIMP before and didn’t like it, it’s time to give the program another try.