A ransomware is a type of malware that locks the computer it infects and demands that the owner pay fines for allegedly violating several laws. The notices displayed are purported to be issued by companies or law enforcement agencies which falsely claim that the user’s system had been used for illegal activities, or contains illegal content such as pornography and unlawfully obtained software such as pirated edition of Windows. The idea is to scare the user into cough up the money.

The malware blocks all access to the desktop, and often the start menu and user files and programs. System tools such as task manager and registry editor are also blocked. It is often impossible to get to the normal working desktop. At times, the ransomware will attempt to extort money from the user by forcing them to purchase either a program to decrypt the files it had encrypted, or an unlock code which will remove the locks it had applied. 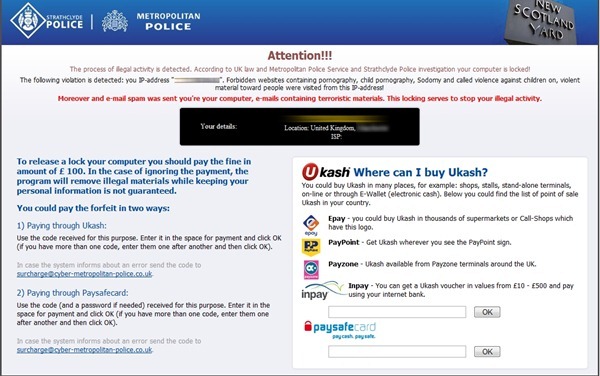 Kaspersky WindowsUnlocker is a free tool that helps you rescue your computer from such a catastrophe. Since the computer usually cannot be started normally when infected with such type of malware, Kaspersky provides this tool as a bootable ISO image that can be burned to a CD or DVD or used to create a bootable USB drive. Once you have this bootable medium ready, you need to boot your computer from the Kaspersky WindowsUnlocker disk and follow the onscreen instruction to remove the offending programs from the registry.

Once the registry is cleaned, you will be able to login into Windows but you still need to remove the remains of the ransomware from your computer. This you can do by using any antivirus program you may have. It is recommended that you use an antivirus rescue disk to scan the computer before you start Windows to prevent any chances of the malware returning back to infect the registry.

Keep in mind that Kaspersky WindowsUnlocker is not an antivirus scanner and will not remove other kinds of malware from the PC.