If you are a space buff, you must have heard of Celestia, a three-dimensional space simulation program that allows users to travel through an extensive universe exploring planets, stars and galaxies. You can zip through space, visit planets, orbit stars and go forward or backward in time. For more than a decade, Celestia was pretty much the only thing we had. Now we have a new entrant – SpaceEngine.

SpaceEngine is another free space simulation software that lets you explore the universe in three dimensions, starting from planet Earth to the most distant galaxies. Users can fly through the SpaceEngine universe using keyboard controls at any speed from meters per second to hundreds of light years per seconds. The direction of travel is controlled by the arrow keys and the speed of travel by the mouse wheel. You can pan the view or rotate around an object using the mouse. To search an object, press F3 and type the location, or press F2 to bring up the solar system browse. Once you’ve chosen your destination, hit G to arrive at the celestial body. These actions are also available from a menu which is hidden by default and can be invoked by pressing the ESC key 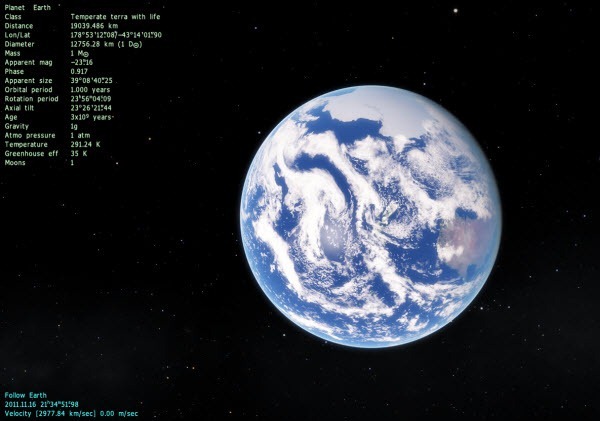 SpaceEngine is a hefty download at 400MB, and the large size is due to the large number of high-definition texture maps of earth and other planets of the solar system. In many ways SpaceEngine is better than Celestia, especially the rendering and details. Watch the following videos.