Sound effects generators are software programs that lets you create old school electronic sounds and effects – plop, thud, splat and boom – to use in games, videos and other projects. While free to use sound clips are abundant on the web, if you want your project to be unique you would create your own sounds. And if you are particularly weak with keyboards (the instrument), take a look at these synthetic sound effects generators.

sfxr is a pioneering little program created with the purpose of providing a simple means to get basic sound effects into a game for those people who work hard to get their entries done within a deadline and doesn’t have time to spend looking for suitable ways of doing this. 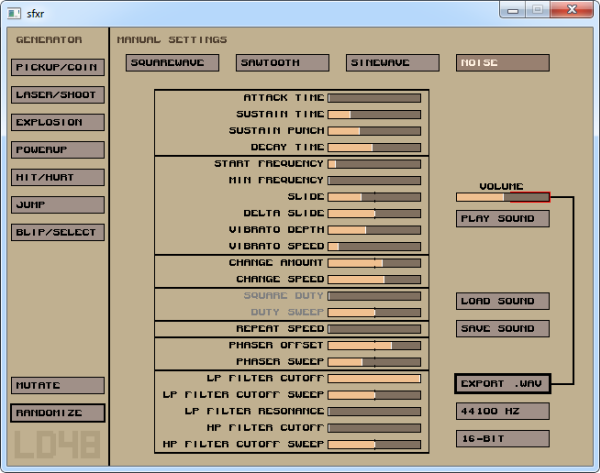 By hitting just a few buttons in this application you can get some largely randomized effects. Basic usage involves hitting the randomize button or any of the other buttons on the left if you need a specific standard sound like explosion, jump, shoot etc. Listen to the generated sound and if you decide you like it, then export it to a .WAV file and you are done. And if you want to get your hands dirty, there are dozens of parameters that you can tweak manually to fine tune the sound. Sometimes even a small change produces unexpected results. Just keep trying and trying and trying. 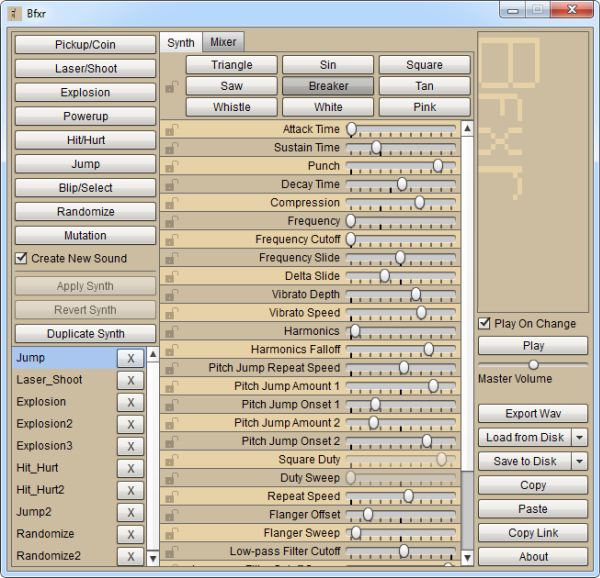 Bfxr is a remake of sfxr with many more exciting features. It can be run inside the browser or as standalone tool downloaded to your computer. Bfxr contains all the button you will find in sfxr and some new things as well:

This is another gem of an app. Using only some basic parameters such as frequency, waveform, frequency modulation, volume modulation and envelope, LabChirp can produce an infinite number of varying sound effects. You can even graphically draw the envelope of the waveform which is real handy when you want to produce effects of varying tones and magnitudes like a crescendo. LabChirp also supports up to 8 audio channels. 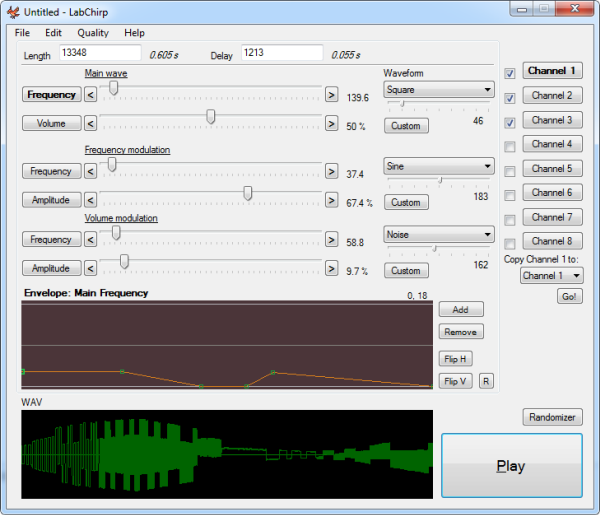 There is also a randomizer for automatic sound generation. There are different presets to generate sound effects for in-game events like footsteps, jump, ouch, explosions and so on. Each click on the Randomize button produces a new sound.

Once you have produced a satisfactory sound use the File > Save As menu to export the sound as a WAV file. You won’t find the .WAV extension for selection in the Save as dialog box, but don’t worry, LabChirp actually saves the file as WAV even though it says LabChirp’s own LCH format.