RetroShare is a open source cross-platform, private and encrypted, decentralized communication platform that aside from sharing files can also be used to securely communicate and chat with your friends and family. For users to start sharing files, they have to generate PGP certificates and exchange it with only those users they trust. The transfer is encrypted using OpenSSL and all searches, messages and files downloaded from strangers must go through a trusted friend. However, the friends with whom you are connected directly and via which the data is passed, cannot see the files that you are downloading or forwarding.

Such a private file sharing network is known by another name – Darknet, and RetroShare might be the first true Darknet in existence. 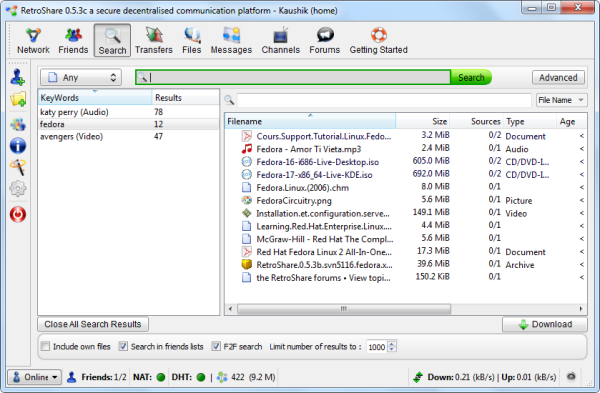 RetroShare is a bit difficult to get started compared to other file sharing programs that you might be familiar with like Frostwire and Bittorrent. The learning curve, I’m afraid, is quite steep but if you can get over the hill you will be rewarded with anonymity. Initially, I was skeptical about the quality of files that I would find in a private network but I was pleasantly surprised to find a pretty rich resource.

The biggest problem, however, is getting enough friends to download files. There are RetroShare Key Exchange forums and chat rooms where you can exchange your PGP keys with others. You can also try to find friends on Reddit. Once you can find enough friends (RetroShare recommends at least 10), you can start downloading files.

RetroShare can also be used among friends and family to privately communicate with each other, without relying on untrustworthy third party services like Gmail and Facebook. There are chat rooms, forums and email all accessible from within the software. In future we could see voicemail, videochat and VoIP implemented with RetroShare through plugins.

It might be surprising to learn that RetroShare has been around since 2006, but it was only recently that the software and network began to see large jumps in usage. In January, downloads tripled when interest in SOPA was at its peak. It more than doubled again in February, when file sharing services were disabled or shut down entirely.

It’s impossible to say what file-sharing will look like 5 years from now, but it can be safely assumed that anonymity will play a crucial role. In the future software such as RetroShare might find precedence over public networks like Bittorrent.