Skype for Windows has announced a new feature called Conversation Ads, which displays advertisement within the calling window during Skype-to-Skype audio call. The ads will only appear for users who do not have Skype Credit or subscriptions, which means the majority of free Skype users. Fortunately, the company says that the ads will be silent, non-expanding and will run after the connection has been established and the program has completed the regular detailed quality checks on the connection.

Apparently Microsoft is attempting to recoup some of the cost that went into acquiring Skype. Microsoft paid $8.5 billion to get Skype last year, and the acquisition is yet to produce fruit. Although advertisement seems to be the easiest way to bring in revenues, the decision is likely to anger a large number of users who are fed up with Skype’s continues downward spiral regarding quality. 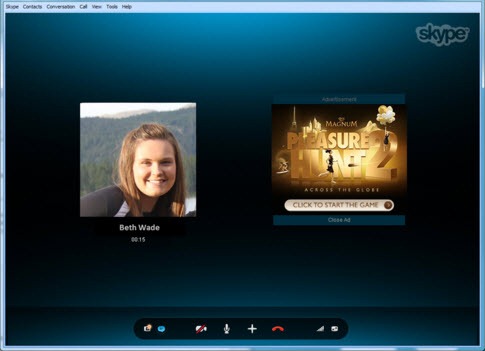 Thankfully, the ads are unobtrusive and banner-type which adds little distraction to the conversation particularly since users don’t stare at the program window when audio calling. Things, however, could turn for worse if Microsoft-Skype decides to introduce audio ads in-between calls or if it starts showing overlay ads in video calls. That could alienate users.

Skype is attempting to present the news as an improvement saying the ads “could spark additional topics of conversation that are relevant to Skype users and highlight unique and local brand experiences.”

“Ultimately, we believe this will help make Skype a more engaging and useful place to have your conversations each and every day”, the blog post of the announcement read.

In order to target ads, the system may use non-personally identifiable demographic information (e.g. location, gender and age). Skype does provide an option to opt-out of allowing Skype to use some of this non-personally identifiable information from the Privacy menu in Tools -> Options of Skype for Windows. If the user opts-out, they will still receive advertisements relevant to their location, but Skype will not use other demographic information for this purpose.