Avira Protection Cloud consist of a client program that connects to Avira’s servers where the actual malware scanner is located. The client program doesn’t have malware detection capabilities of its own when disconnected from the Internet. When a scan is initiated, the program prepares a list of file locations that are known to be frequently targeted by malware. This includes running processes, programs that run at start-up and services. A hash of each file is then generated and sent to the Avira Protection Cloud. 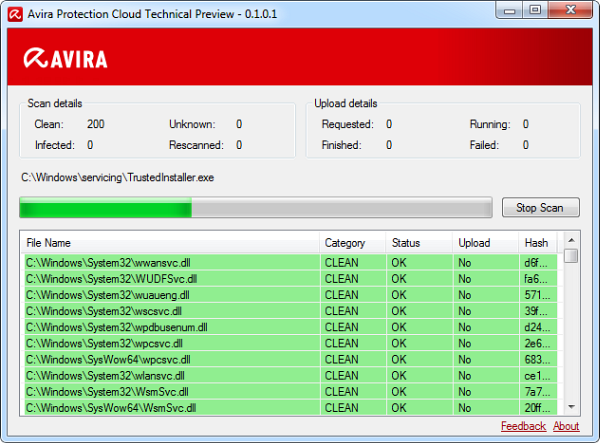 The Avira Protection Cloud servers then matches the hash with a list of known files hashes which allow them to identify whether the file is clean or infected. If an unknown hash is found, the file is uploaded to the Avira Protection Cloud where it is scanned using available technologies. Once the uploaded files have been scanned in the Cloud, the Client displays all available results.

Currently, there is no way of preventing files from getting uploaded to the online scanner. This function is necessary because sometimes the client program fails to identify legitimate programs and proceeds to upload them. If you are certain the file is clean you can skip it and thus save time and bandwidth. Unfortunately, this is not possible. Also, if you cancel the scanning in the middle of the process or your internet connection breaks, you’ll have to start all over again and that means re-uploading all those files.

It should be noted that the scanner doesn’t conduct deep scans. It only scans the most likely locations and only executable files and DLL files are scanned. The scanner also stays away from User directories and any personal folders, which are equally likely to contain infected files. To be honest, I don’t find cloud antivirus scanners to be of any practical use because of this very reason. A half-hearted scan is going to provide you half protection which is no good.

Avira has made no clear statement as to whether Avira Protection Cloud will be released as a free product or a paid product, but it does allude to being part of their “paid product offerings”.