Stoffi Music Player is a new, free and open source music player for Windows that is “aimed at being simple but powerful at the same time”. Stoffi Music Player looks almost like Windows Explorer. The GUI uses the same Explorer scrollbars, buttons, menus and menu highlights. This gives the program a native Windows look that almost makes me believe that it’s a part of the operating system.

The music library view is identical to the Details view mode of Windows Explorer. There are columns that show the artist, album, track title, year, length, genre, last played etc. There is also a Play Count column but it’s not working at the moment.

You can sort your music by clicking on the header of any of the columns. You can also move columns around or hide them. 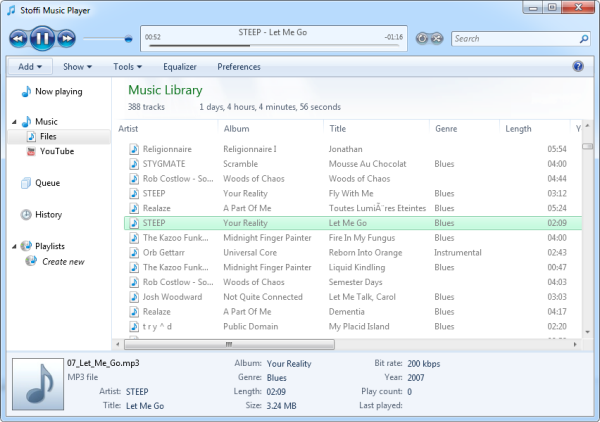 The layout is very fluid and flexible. There is a navigation bar on the left whose width can be resized. A details pane, identical to the details pane of Windows Explorer, is at the bottom which can also be resized to show more or less information. The player is well integrated with Windows 7 taskbar and supports jumplists, playing and pausing music from the taskbar thumbnail. 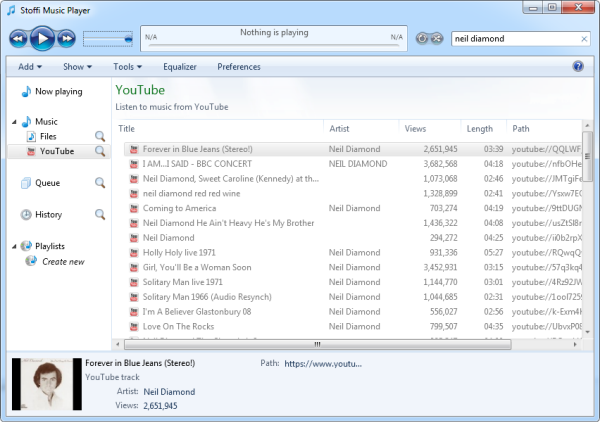 There are a number of different ways to play music on Stoffi Music Player. One way is to add your folders containing music to the player’s library and then playback your music files from the library. Another way is to create a playlist, drag files from the library and drop it into the playlist, and then playback the playlist. Yet another way to play music is to add files to a “queue”. Queues are temporary playlists – Stoffi Music Player will playback files you drop to the Queue and then remove them as soon as it finishes playing.

A universal search tool lets you simultaneously search for music in your music library, in your playlist, in the queue, in your playback history as well as on YouTube. Results from YouTube can be played back in Stoffi Music Player.