If you are trying to install Windows 8 in a virtual machine for testing purposes, no need to struggle with myriads of tweaks that is necessary to make it work on VirtualBox. Leading virtualisation developer VMware has just released VMWare Player 5 which makes installing Windows 8 as a guest operating system on Windows 7, Linux and Mac OS a breeze.

VMWare 5 now automatically detects the installation media as Windows 8 when you load the ISO image of the operating system into the virtual CD drive. Previous versions of VMWare Player didn’t play nice with Microsoft’s new operating system, and installing Windows 8 in VirtualBox was a big pain in the neck. VMWare WorkStation 8, even though allowed Windows 8 to be installed, presented numerous difficulties in getting the network card to work. VMWare Tools were also unavailable for Windows 8 guest which made things like sharing folders with the host operating system impossible. All these issues have been ironed out in VMWare Player 5 and VMware Workstation 9. 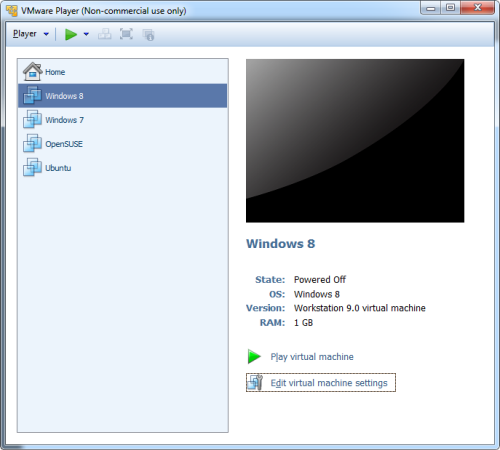 VMWare Player 5 and VMware Workstation 9 has been designed to run on Windows 8 as well as utilize Windows 8 virtual machines, with support for multi-touch, Easy Install mode, USB 3.0, and Unity. It also includes a number of graphical improvements such as support for DirectX 9.0c Shader Model 3 and OpenGL 2.1, that enables VMWare Player to render 3D in Windows 8 without hardware acceleration.

Other improvements include the ability to create encrypted virtual machines, support for up to 4 virtual processors, 2 TB virtual disks and up to 64 GB of memory per virtual machines and several other changes.