Kerbal Space Program is a fun and engrossing space simulation game that puts you in charge of an alien space program. Your job is to build rockets and help the aliens, called Kerbals, get off the planet and into space. The game is still under development, and as yet there are goals and objectives. It’s pretty much an open sandbox where you are free to build anything you want and fly it to anywhere.

The core of the game lies on rocket design. If you want to build a worthy spacecraft capable of successfully launching the aliens into space and safely returning them back to their planet Kerbin, you must carefully plan each stage. The tutorial is a bit long winded but it explains the basics nicely. Instead of reading the tutorial, you can watch the tutorial videos which will walk you through the steps in less time. 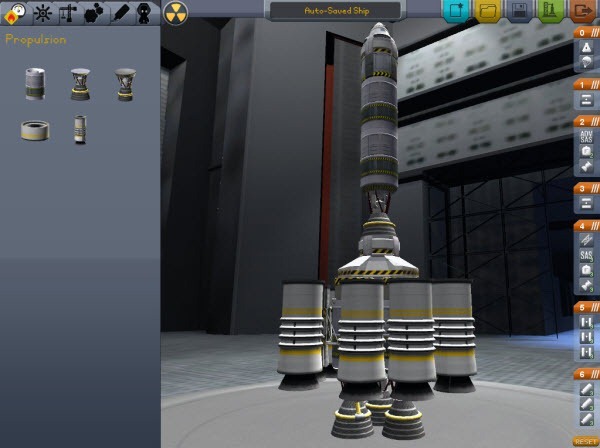 You start at the Rocket Assembly Building where the designing takes place. Various pre-fabricated modules such as liquid fuel engines, fuel tanks, solid fuel rockets, landing gear, wings, steering fins, struts etc are available. Each part comes with a short description and specification. To build a rocket simply drag the parts and slap them into each other. There is no size limitation on how big the rocket can be and no budget to limit your design. You can build simple single stage rockets to more complex 2 or 3 stage rockets. You can start with simple goals like building a rocket that doesn’t tumble out of control and then move on to challenging tasks like getting into orbit, or landing the spacecraft on one of the two fictional moons (Mün and Minmus). Or just let your creativity go wild and build bizarre shaped rockets and watch the fun.

Once your rocket is ready it’s time to head out to the launch pad to try out your creation. If the rocket is well built it will take off without incident. Once in flight, you can maneuver the rocket by controlling the pitch, yaw and thrust with different keys. There is no auto-pilot as such but there are what they call “S.A.S. Module” or Stability Augmentation System that help stabilizing the rocket. Without S.A.S. Modules it’s pretty hard to control the rocket, so make sure you install them when you’re building the rocket. 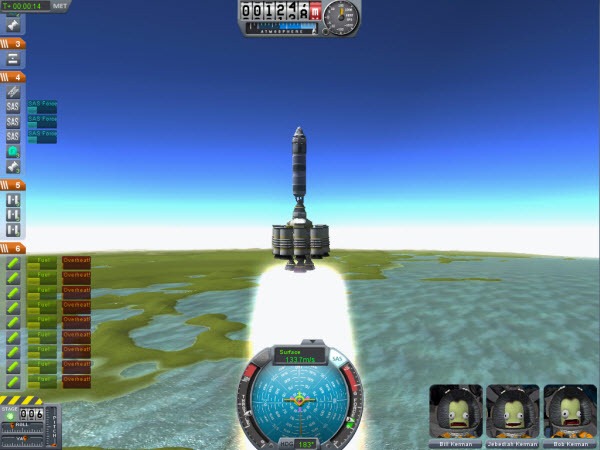 Overhead displays lets you monitor each stage of the rocket, the rocket’s altitude, speed, bearing etc. If you placed a command module into the craft you’ll have space crews – three Kerbal astronauts. Their faces and reaction, visible during the entire trip, seems to periodically alternate between elation and fear.

The game supports extensive end-user modification, allowing craft parts to easily be built and implemented by players. As a result, the game enjoys a significant modding community, with hundreds of modifications released to date. These modifications to the game add to functionality, allowing craft such as land vehicles or airplanes to be created far more easily than with the base game.

Kerbal Space Program is currently in the alpha stage of development, and can be downloaded for free. However, there is a newer updated version that can be purchased for $18. The free version of the game will always remain free but will never be updated.