Sean Parker has been involved with some of the biggest movements on the web, and now he has placed his bets on the video chat application Airtime as the next big thing.

Sean Parker is an internet entrepreneur whose work as co-founder of the file sharing service Napster in 1999 gained him notoriety, wealth and, in some circles, infamy. As a teenage hacker, Sean and a friend created the online service to share music amongst Internet users. The site became an overnight success, garnering tens of millions of users within the first year. The site was famously opposed by the Recording Industry Artists of America (RIAA) among others and was shut down by a court judgement only a couple years after launch.

Sean’s next big venture after Napster was a social address book site called Plaxo. Plaxo integrated Micorosoft Outlook into its functionality and acted as a precursor to social media portals to come. Sits such as Facebook and LinkedIn are indebted to the social networking innovations pioneered in Plaxo.

In 2004, Parker was introduced to Mark Zuckerberg through his roommate’s girlfriend, and the two of them co-founded the wildly successful Facebook social media platform.

When we go through the history of Sean Parker’s professional career, it becomes obvious that he has a knack for picking winners in the race for the “next big thing”. So when Sean Parker announced the release of his new video chat service, Airtime, co-founded with former Napster partner Shawn Fanning, people took notice. 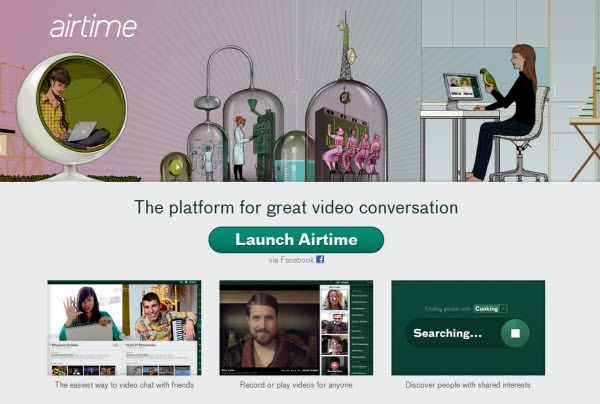 Airtime is a social networking video chat service that bears a resemblance to Chatroulette. The site features pre-recorded web casts of people that are posted to the site and then commented on and rated by other users. It also features a random connectivity feature that is similar to Chatroulette. The major difference between Chatroulette’s randomly connected users and Airtime’s is that Airtime allows users to join categories such as cooking or music.

While Chatroulette was plagued with user vulgarity and exhibitionism, which prevented the site from gaining general usage amongst internet users, Airtime takes advantage of a ranking and popularity system to help weed out the uninteresting or offensive users. The algorithm for rating live web cam based chat sessions will be based on how long it takes for a user to be “Nexted”. Nexting, as it is called, is the act of pushing the “Next” button to disconnect from the current user and connect to another user. The popularity algorithm will take into account the average time a particular user is “Nexted” by their opposite chat partner. The combination of live ranking along with static ranked content (uploaded videos) will allow certain users to become people of interest on the site. Parker and Fanning announced the opening of the Airtime site this June with the likes of actress Olivia Munn, rapper Sean “P Diddy” Combs and actor Joel McHale to do live video chat appearances on the site.

In interviews, Parker has said that he believes social media will very soon be making the move to live video. The ability to gathering people together for common causes and the subsequent social power of these groups is something that Parker does not think sites like Facebook or LinkedIn have figured out how to tap into. Those familiar with Parker’s recent involvement with Facebook Cause will not be surprise at his passion for creating platforms for individuals to garner grassroots political power. Parker also sees random video chat as a great way to eliminate” approach anxiety” by throwing individuals into the middle of conversations they would not otherwise know how to enter.

This guest post is contributed by Jason Phillips. He is an internet freak and can’t imagine his life without internet. He wrote many articles on video chat and webcam chat for different websites. His leisure includes chatting with his friends and has almost 300 friends in his circle.