Want to play a game? Alright! Start at any Wikipedia page and click the first link you encounter in the main text of the article, and then repeat the process for subsequent articles. Eventually you’ll end up at the article about Philosophy. The first link on the Philosophy article takes you to Problem which returns you back to Philosophy. It has been estimated that more than 95% of all Wikipedia articles exhibit this phenomenon which was first discovered in May 2008.

The path from a Wikipedia article to Philosophy takes unlikely routes, for instance, starting at Tacos you are taken through 19 steps via subjects such as Uto-Aztecan languages, Pre-Columbian era, Archaeology, Primate and Taxonomy, and finally ending at the Philosophy-Problem loop. Some routes are short – Samsung to Philosophy takes 11 steps, while others are long winded – Tandoori Chicken to Philosophy goes through 29 steps with stops at Astronomical object and Mammal.

WikiLoopr is an amusing little application that shows you these routes. Enter any term for which a Wikipedia article exist in the search box and press Enter. Then watch the chain of events unfold. 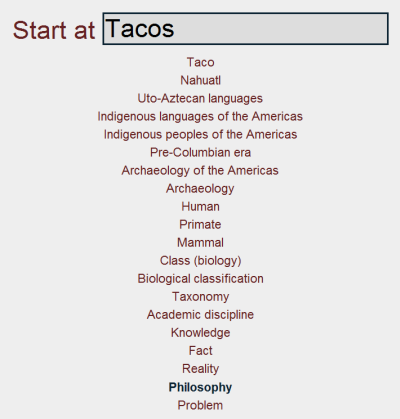 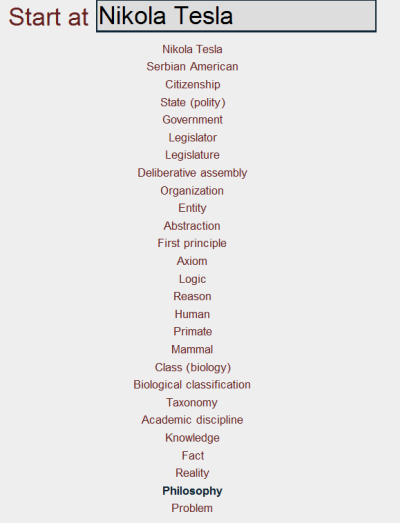 There have been some theories on this phenomenon, with the most prevalent being the tendency for Wikipedia pages to move up a "classification chain.” The Wikipedia Manual of Style guidelines says that the lead section of an article should start by defining the topic of the article, so that the first link of each page will naturally take the reader into a broader subject, eventually ending in wide-reaching pages such as Mathematics, Science, Language, and eventually to Philosophy.

[via Hacker News and Wikipedia]