Google Maps will begin offering live traffic information for major roads in six large Indian cities and their surrounding suburbs: Bengaluru, Mumbai, New Delhi, Chennai, Pune and Hyderabad. As in other countries, Google’s traffic data is shown in a simple and readable color scheme — red for significant congestion, yellow for minor slow-downs, and green for free-flowing traffic — to help you analyze the traffic on your route with just a quick glance. You can view live traffic by enabling the traffic layer on maps.google.co.in or in the Google Maps app on your smartphone, or simply by visiting google.co.in and entering a query like ‘traffic in hyderabad’. On a desktop browser, Google Maps also allows you to check “typical” traffic conditions for a particular day and time, based on a wealth of historical data. 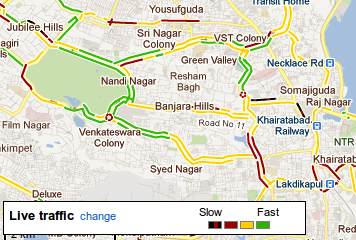 Voice navigation will be available for thousands of cities, towns, roads, and other points of interest where data is available, as mapped by users in Google Map Maker. Using a friendly and familiar Indian accent, your phone will announce upcoming direction as you move along your route. Of course, this requires your phone to have GPS as well as mobile Internet connectivity. In places where traffic data is available, Google Maps Navigation will take congestion into account and suggest better navigation routes that to ensure that you arrive at your destination on time.

You can download the Google Maps Navigation app from Google Play.