DropboxPortableAHK, as the name suggests is a portable version of Dropbox implemented using AutoHotkey. It allows you to run Dropbox’s client program from a USB Flash drive and sync files contained on the USB drive to your Dropbox account, regardless of which computer you are using. This enables you to carry your files around with you and at the same time have them sync seamlessly with your Dropbox storage. DropboxPortableAHK is especially great when you do not have permission to install the program on the computer, or if you work on multiple shared computers and do not want to hassle with Dropbox’s web interface. There are plenty of other scenarios where DropboxPortableAHK can be useful.

On step 4, you need to set the location where your Dropbox folder should reside. The default folder path is “.Dropbox”, which will place your Dropbox folder in a subfolder in your DropboxPortableAHK directory. If you want Dropbox to have it’s own folder, enter the path as “Dropbox” (just remove the dot) that would place a folder called “Dropbox” on the root of the USB drive. 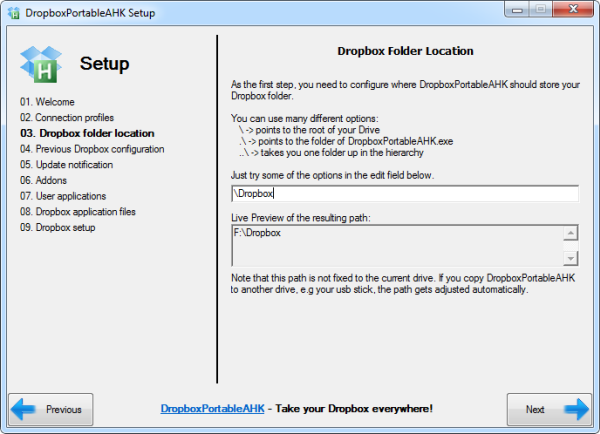 Be aware, not to enter an absolute path like “C:Dropbox”. This will cause your Dropbox folder to be placed on every computer you plug the USB drive to. That would be catastrophic if you use a lot of public computers.

On step 6, you can configure additional options such as create an autorun.inf file, Dropbox folder protection the prevents Dropbox from deleting your files o on the server if the USB drive is removed, and a few more. 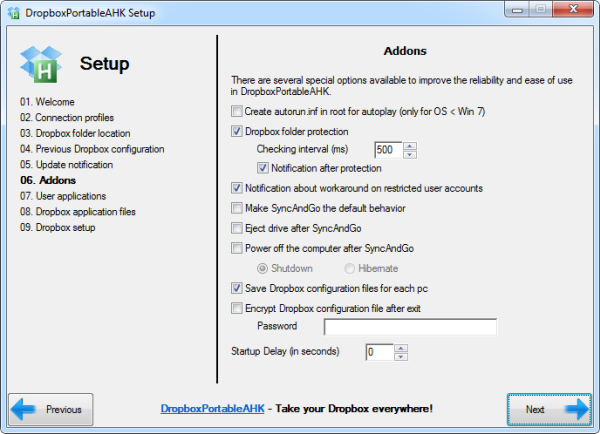 Another nice feature is that you can set up application that are launched before Dropbox starts and after Dropbox exits. This is helpful if you need to do some actions before Dropbox starts checking your Dropbox folder, e.g. dismount a TrueCrypt container that resides in your Dropbox folder, so that Dropbox is able to sync it, or after Dropbox has synced all changes, e.g. mount the TrueCrypt container again.

Once you have completed all steps, you are ready to go. If you do not have Dropbox installed on the computer, you will be asked to do so. Install Dropbox like you normally do, but don’t use any special Dropbox folder location here. DropboxPortableAHK will redirect the folder to the one you specified in step 4.