The Centre for Railway Information Systems (CRIS) of the Indian Railways on Wednesday launched Rail Radar – an online portal which allows the public to track train movement in near real time. RailRadar is built upon the popular Google Maps application. The interactive map shows train movements all over the country with tiny blue and red arrows – trains highlighted in blue indicate those that are running on time while the red markers indicate the trains that are delayed or behind schedule. Users can zoom into the map, click on any train to view the exact route of the train including details like current location, and upcoming stations. Users can also search for trains by name and number see its status.

Indian Railways operate more than 10,000 trains everyday, out of which RailRadar can spot about 6,500, which is an impressive number to start with. At present, RailRadar is configured to update itself every 5 minutes so the train locations shown on the map can be slightly off, but it’s good enough. 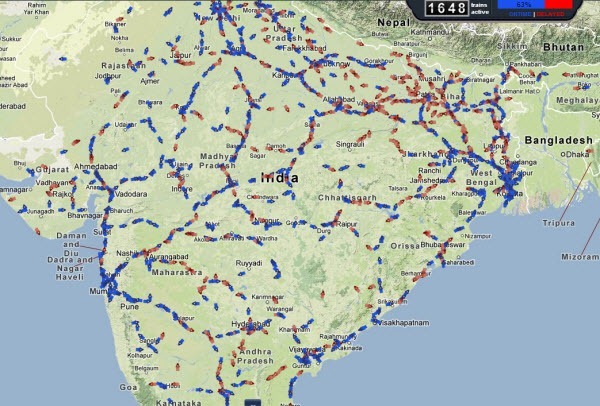 “With the launch of RailRadar, we are offering information in an entirely new way about train movement, which is, perhaps, the first for any major railway system in the world,” said Sunil Bajpai, General Manager, CRIS.

“Over the last decade, train network and traffic in India have grown tremendously. We are also very sure that this trend will continue over the next few decades. As railway travelers too, today we also want to know more – beyond just ‘an’ ETA of ‘a’ train at ‘a’ station. As the volume and complexity of information increases – we believe that new methods of information dissemination (associated with Trains and its running information) will be required sooner than later. RailYatri.in’s RailRadar is one such attempt on that line. We believe that value of information/directions can greatly be enhanced when presented graphically rather than just plain text,” he added.

The information users see on RailRadar comes directly from Indian Railway’s train tracking data. This data in turn comes from GPS units on the trains.

CRIS plans to install GPS devices in all 10,000 locomotives. “We will be rolling this out for all our trains and over the next year the results will start showing,” said Bajpai.