Bitdefender has just released a free edition of Bitdefender Antivirus for Windows, that’s designed to be extremely light-weight and extremely minimalist without compromising on malware detection and removal capabilities of Bitdefender’s paid products.

The most striking thing about Bitdefender Antivirus Free is how little there is to call an interface. Click on the program icon in the taskbar, and it opens a small vertical window no bigger than a instant messenger chatbox. Only three buttons are visible – one lets you toggle state of the “Virus shield” from ON to OFF, another one lets you toggle the ON/OFF switch for “Auto Scan”, and the last one is a login button “My Bitdefender” and it tells me that I have 29 days left to login. So it’s likely to stop working or stop updating unless I login within the stipulated number of days. 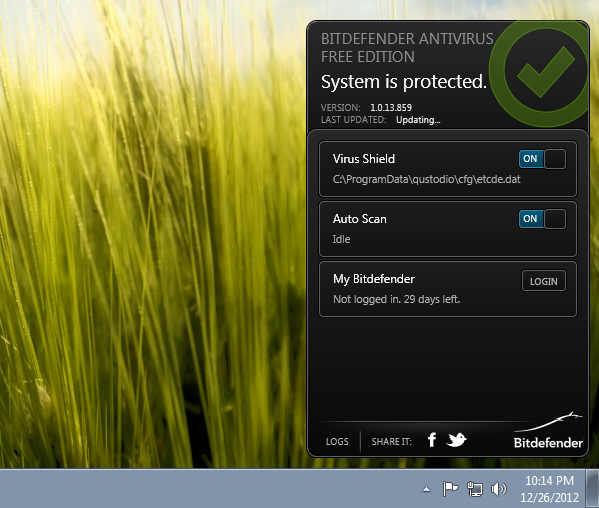 And that’s it. There are no configuration boxes, no pages after pages of settings, absolutely nothing. It’s forget and install. It doesn’t even bother you with alerts and status messages, as it resolves all issues itself. For instance, if you initiate an on-demand scan, which you will have to do from Windows Explorer context menu, the antivirus informs you of the result of the scan via balloon notification, which you can totally dismiss. I have no idea how the antivirus will react when it finds an infection, but I guess it will silently kill or quarantine it and then notify you with another balloon notification.

You can, however, later open the antivirus program window and see detailed results of the scan. 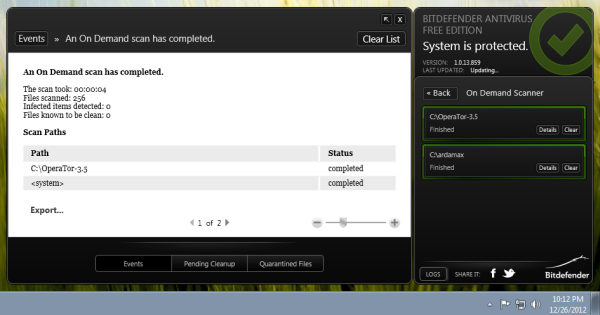 Bitdefender Antivirus Free is available only as a web installer. You have to download and run a ~158KB file which will then download the necessary program files from the Internet and install the same on the computer. After this, the program will start updating virus definition files. This means that you cannot install this antivirus program on a non-networked computer, but isolated and Internet connectivity-less PCs are rare these days.

Under the hood of Bitdefender Antivirus Free, there is: