You know those songs that you can’t stop listening to? You set them on repeat until your ears bled, but there is a better way to listen to them. Meet ‘Inifinite Jukebox’, a product of a Music Hack Day event held in MIT Boston. Instead of simply looping the song from start to end over and over again, this web app creates a never ending, constantly changing version of uploaded tracks.

Not all songs work perfect. For example, it works extremely well for Superstition by Stevie Wonder and Gangnam Style. In Californication by Red Hot Chilli Peppers, the track once jumped to a spot that sounded unnatural. Essentially, the Infinite Jukebox works best with songs that have a lot of repetition. 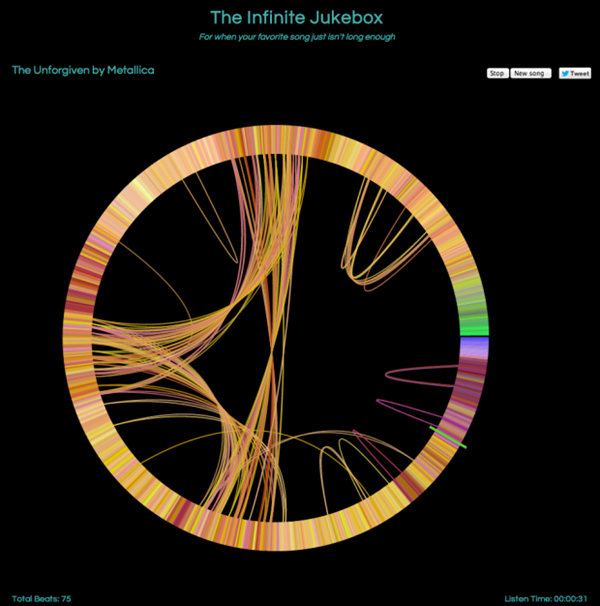 The infinite song is accompanied by a visualization that shows what portion of the song is playing and how similar parts are connected.

The chord diagram shows the beats of the song along the circumference of the circle along with chords representing the possible paths from each beat to it’s similar neighbors.  When the song is not playing, you can mouse over any beat and see all of the possible paths for that beat.  When the song is playing, the visualization shows the single next potential beat.  I was quite pleased at how the visualization turned out. I think it does a good job of helping the listener understand what is going on under the hood, and different songs have very different looks and color palettes. They can be quite attractive.

The Infinite Jukebox is the handiwork of Paul Lamere, director of developer platform for music intelligence company The Echo Nest and the man behind the Infinite Gangnam Style hack at Reykjavik’s Music Hack Day.