One good thing about computer games is their wide user base, irrespective of age or culture, especially among kids. That is why when Microsoft released Windows 8 with its Apps store and applications, it became an instant hit. Since then, developers have built various free game apps that kids will not only enjoy playing, but will also teach and help them in their learning process. Even better, Windows 8 RT tablets optimized for all of windows 8’s best features are now also available in many online retailers like Newegg. As a parent, if you are considering giving your children gifts that they will appreciate, here are the must have list of Windows 8 apps that you can download. 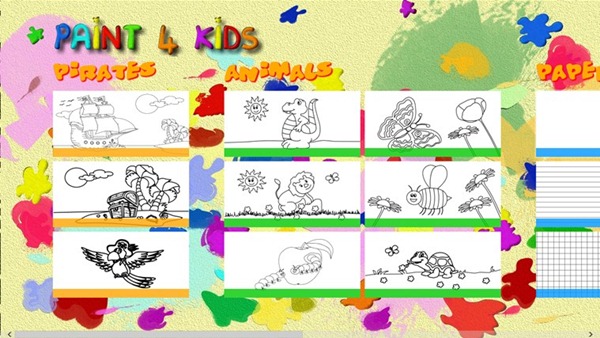 Just as the name suggests, Paint 4 Kids is a great app that will teach your kids how to mix colors, draw, and paint using virtual art tools. It contains in-built images and drawing objects that your kids can use to color pictures of their own. As a parent you would have noticed that one of the favorite subjects of your child is coloring. The great thing about this app is that, while your kid gets to play and enjoy his favorite chore, you have less ink-soaked, body and clothes to wash. Let them release their creativity and imagination wholeheartedly; you just sit down and enjoy watching them do it. 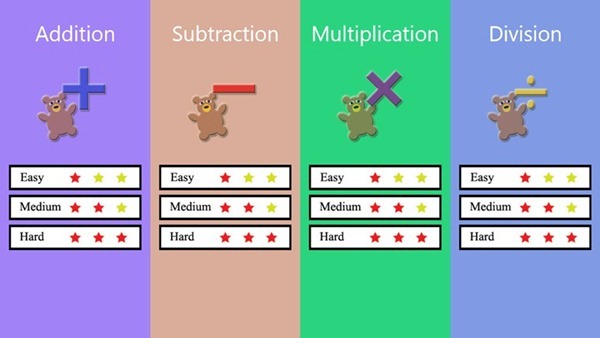 Number Magic is one of the most popular computer games for children. Developed by Metro Gems, Number Magic is educational, and with it, kids can learn how to perform and practice basic arithmetic tasks like addition, subtraction, division and multiplication. And of course, this application is very simple to learn and it can be installed within seconds. 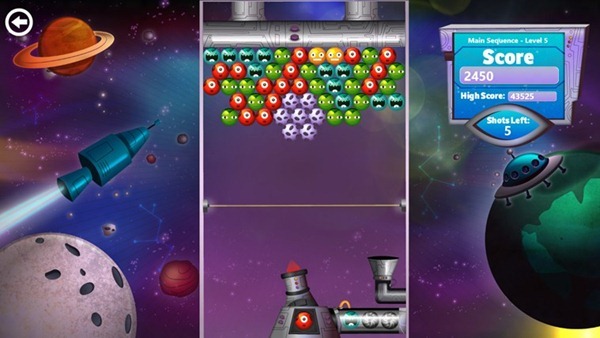 There is no doubt about it; all kids will enjoy playing this game. It is educative, easy to learn and just down-right fun. The game is played by matching 3 bubbles of the same color together and once matched; they then get “popped out” in a colorful way. Furthermore, the visuals are clear and crisp, and the music goes particularly well with the lighthearted mood of the game. To be a winner and starred player, all the bubbles need to be cleared away from the board. 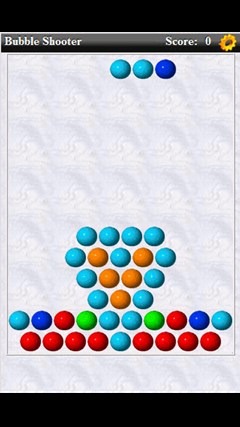 This is yet another great app game that you can get for your kid. What makes it different is the combination of its creative design, exciting game plot and wonderful jungle soundtrack. A player must match 3 of the same characters together, toss them around, and then pop them in a batch. The concept is simple; however this app game has that factor most people look for in puzzle games: a challenge. Kids will definitely enjoy playing through progressively challenging levels of Bubble Shooter while having a great time “popping away” colorful creatures. 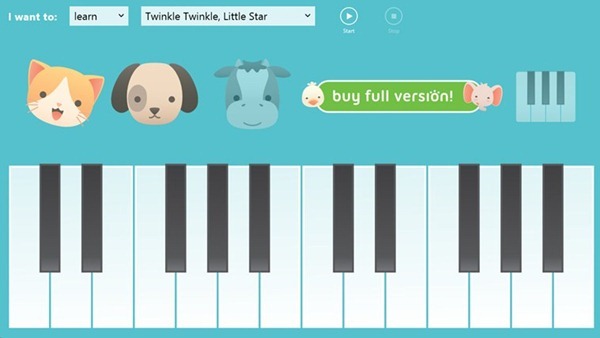 A musical teacher at your fingertips; this is a popular musical game that every kid will enjoy playing. It is a specially designed app to teach kids the fundamentals of piano playing and musical key recognition. It has two fun animal sounds and six inbuilt children songs learning and practice—engaging children to expand their musical talents. 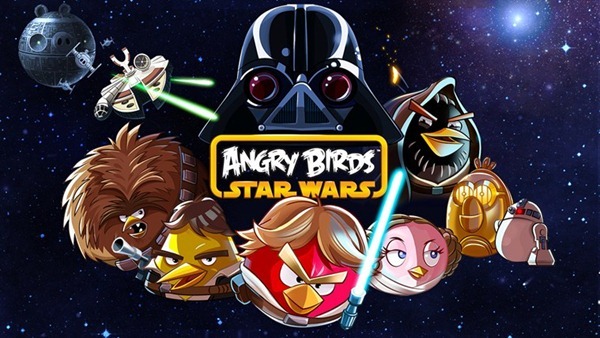 A long time ago in a galaxy far, far away… a group of very angry Jedi birds had to face off against their galactic nemesis— the evil Empire’s Pigtroopers. Angry Birds Star Wars is an interactive touch game that features breathtaking graphics, over 80 levels of gameplay, and incorporates music from the original Star Wars score. Fans of A New Hope will find their favorite characters like Luke Skywalker, Obi Wan Kenobi, Han Solo, Darth Vader, and much more in this recreated Angry Birds game as well as killer fighting “skills” from each bird. The basic gameplay is as follows: players would launch birds across the screen to knock over Bad Piggies. Players will be rewarded stars based on how well they successfully destroy all the pigs, (depending on the number of birds remaining after all pigs are destroyed). Players will need to complete consecutive levels in order to advance in the game. Price: $4.99. 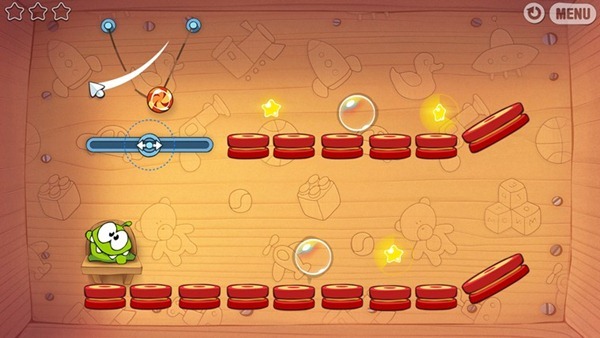 Which kid doesn’t adore a cute little green creature who loves candy? In Cut the Rope, players must feed candy to Om Nom by cutting ropes and using anti-gravity buttons, floating bubbles, bouncy cushions, magic hats, suction cups, and other interactive items. If they fail to feed Om Nom by either dropping or shattering the candy, Om Nom will be extremely sad and groan in disappointment. Each level introduces new challenges and gradually increases in difficulty. To advance, players must strategically manoeuvre the candy around obstacles to get to Om Nom while collecting as many stars as they can. 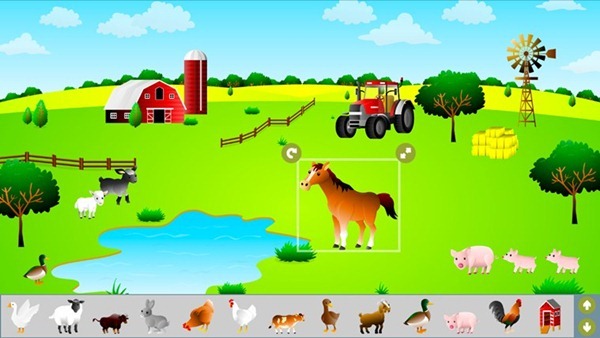 Sticker Tales is a fun and educational game that lets kids create and paste images onto illustrated backgrounds. The application includes 40+ corresponding stickers and 6+ engaging backgrounds to select from—so that kids can create and expand their creativity to the fullest. In addition to customizing backgrounds, Sticker Tales includes mini games children will certainly find engaging and rewarding. These games include arranging patterns, completing mazes, and matching shapes. 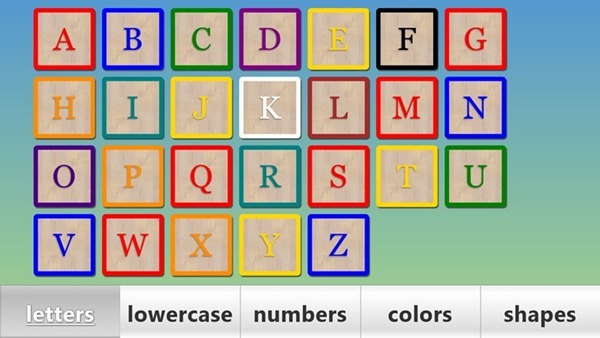 Another educational app suitable for children, Learning Blocks can teach your child the alphabet in a fun and interactive way. Kids are encouraged to swipe and touch each block to hear each alphabet sound. In addition to alphabets, this app also features uppercased and lowercased letters, numbers, shapes, and colors. A great app appropriate for kids ages 2-5 years. Price: $1.99. 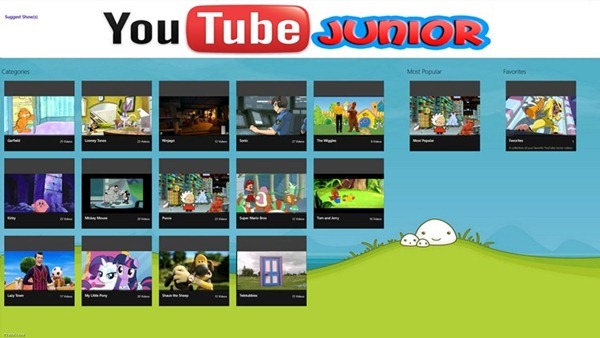 Although YouTube Junior isn’t a game, it is nevertheless an application kids will surely enjoy. The app compiles popular children-friendly shows like Tom and Jerry, My Little Pony, Garfield, Mickey Mouse, and Blues Clues — just to name a few. These shows are capable of being played right in the app’s interface and include multiple episodes so that children can continuously watch one show after another. To top it all off, parents can finally rest assure that their children will not be exposed to any adult or offensive content while surfing YouTube.

Now is a great time to come to terms with the fact that not all computer games are bad. In fact, there are educative and learning inducing games out there that you can purchase for your children. This is a great approach that will not only aid in their personal development, but also keep them mentally stimulated with activities ranging from arithmetic practice to learning an instrument. But of course, equally important, it is good for your own peace of mind and much needed nap.

This is a guest article by Courtney. Homeschooling and tutoring her kids in mathematics, English, and music helped Courtney contribute this article for fellow moms and tech-readers. Finding the perfect apps for kids is never easy, but with the release of Windows 8, users can now download a variety of applications to try.