The key addition to Bitdefender Windows 8 Security is the support for the new Early Launch Anti-malware (ELAM) feature. As already explained in another article, “Early Launch Anti Malware” provides a mechanism that allows anti-malware software to start before all other third-party components start, including drivers. This allows Bitdefender’s antivirus scanner files to load very early during the boot process, before the malware can load. This improves Bitdefender Windows 8 Security’s ability to detect and kill infectious programs. 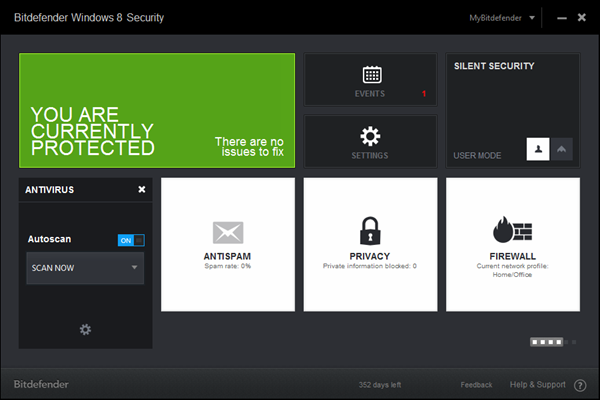 In addition, the program also includes a “Proactive App Scanner” that automatically analyses your Windows 8 apps and notifies you when one has been compromised. Also included is Bitdefender Safepay, a secured internet browser that keeps digital attacks at bay by automatically opening all your online banking and e-shopping pages in a separate, secure browser.

And of course, the interface is optimized for the Modern UI.

Everything else is identical to Bitdefender Internet Security 2013 (except the interface). This means that you’ve got a real-time scanner, vulnerability scanner, anti-spam, internet firewall, social networking protection, parental controls and more.

Bitdefender Windows 8 Security retails for $60 for 1 year of protection. Thanks to Bitdefender, we have 5 licenses of this antivirus scanner to giveaway to our readers. If you are interested in entering the giveaway contest, leave your name and a valid email ID in the form below. Winners will be selected by a random draw. The contest closes on February 19, 2013.