Do you have favorite movie scenes that you like to watch often? Maybe it’s the final showdown between Neo and Agent Smith in The Matrix or the steamy love scenes in Titanic, instead of fiddling with the seekbar you can configure VLC Media Player to automatically skip to the favorite parts. This extraordinary functionality is brought to the popular media player by the freeware program Video Commander.

VLC Media Player already has the ability to loop a video between two specific time positions, as opposed to looping from beginning to end. This allows you to repeatedly playback your favorite scene in a video. Unfortunately, this feature is not well developed. VLC forgets the time settings as soon as you stop the video. It also breaks down when you add more than one videos to the playlist.

Video Commander is an external control interface for VLC player that enhances the built-in A-B loop feature by allowing the user to create entire playlists of videos with specific start and stop time, and to save the playlist for later.

To add videos to the playlist, you start with Video Commander. Open this portable program and click on the “+” button on the right. Select the video you wish to play, and then specify the start and the end time, or alternatively the start time and the duration of playback. The time field is in the format HH:MM:SS.

Continue adding videos with specific start and end times until you have finished building the playlist. Then click the big PLAY button. This will launch VLC Media Player and the added videos will start playing from exactly the times specified by you. At this point, you can close Video Commander’s window. It’s work is done. Your playlist has been automatically imported into VLC Media Player’s built in playlist window, with the video start and end times intact. 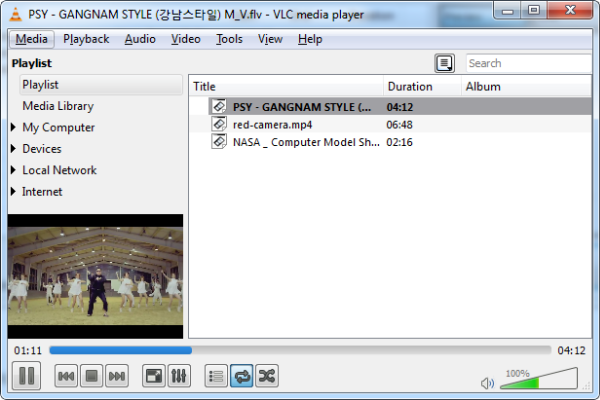 Besides building playlists, Video Commander lets you position VLC Media Player on the screen by setting X and Y positions. You can also set the width and height of the player window. Two profiles come already configured and assigned to “Preview” and “Live” modes – the preview mode plays a smaller version of the player and the live mode plays full screen, It is possible to reconfigure these modes and quickly switch between them by clicking on the appropriate buttons.

Aside from personal viewing, Video Commander can be used productively during video presentations.