Foul language, swearing, cursing, cussing and bad words in general are commonly seen on the web. Just go to any website and read the comments at the end of an article, or visit YouTube or any discussion board or social networking site and you will almost always come across vile postings full of hate and hostility and lack of respect in general. If you hate profanity and want to get rid of them from your browser, either for yourself or to create a friendly environment for your kids, this article will guide you how and from where to begin.

The best way to remove profanity on the web is to filter them using a blacklist of known bad words. In Chrome, you can install the Simple Profanity Filter that replaces user defined words with asterisks such as ****. You can configure the filter to show the first character of the blocked word and hid the rest, in case you are curious what the blocked word is. For instance, a filtered word will show up as F****.

The extension comes pre-installed with a small selection of cuss words that should do the job initially. You can make the filter more effective by adding your own keywords. 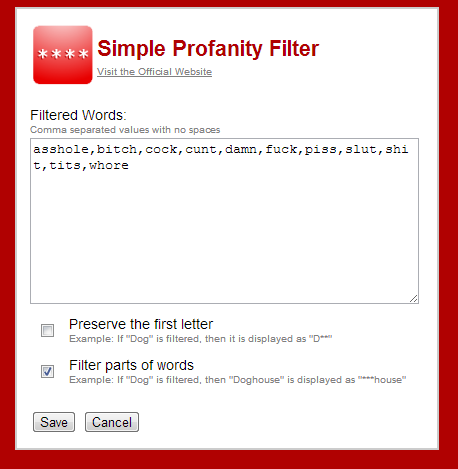 Firefox has one of the best profanity filters made for browsers – ProCon Latte Content Filter, which can be used not only to censor inappropriate language but restrict access to websites that contain questionable content. When ProCon Latte detects objectionable words on a webpage, it blocks the page and displays a notification. You can then allow Firefox to display the page temporarily or add the domain to the whitelist to prevent ProCon Latte from blocking the page in future. Once the page loads, ProCon Latte will filter swear words and replace them with garbage characters such as [email protected]#$%^&* (this can be changed in the options page). 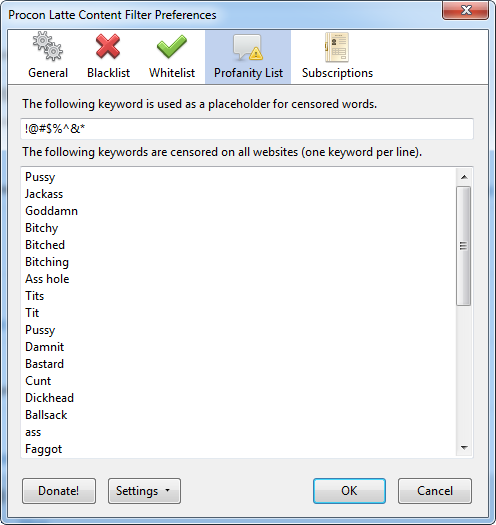 You can disable Content Blocking altogether, and stick to only Profanity Blocking. This way, webpages are not blocked but profanity is censored. ProCon Latte supports blacklist, block websites list, and whitelist.

If you want to take web cleansing a step further, install tinyFilter for Chrome. Rather than hiding the bad words, this extension disables access to the entire webpage. This is the default behavior and can be easily overridden by disabling “content blocking” from the extension’s option page. Doing so will change tinyFilter to a less aggressive profanity filter. tinyFilter is also based on keywords and comes with a self-updating blacklist. You can also add your own keywords. 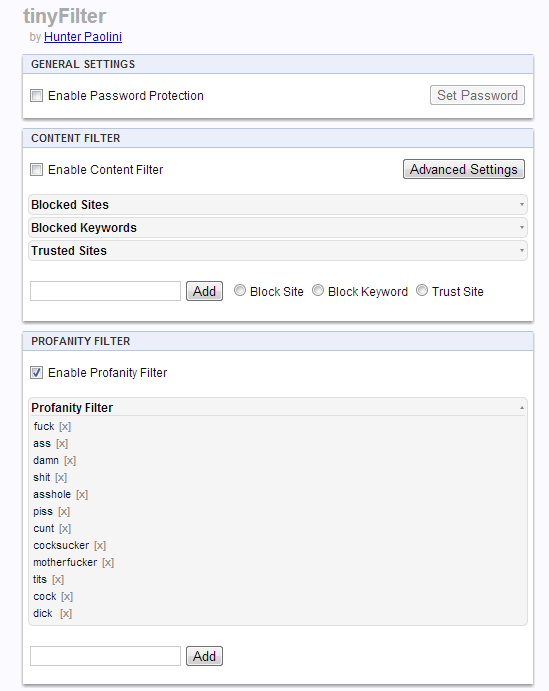 tinyFilter’s content blocking is useful when you want to block pornographic material and adult websites. Pages can be blocked by URL too.

Since the source of all foul language on the web is user-generated content, mostly comments, you can leave the articles alone and target only on offensive comments.

Comment Snob for Firefox and Chrome hides undesirable comments from the web based on the following rules:

You can choose which rules you want to enforce. 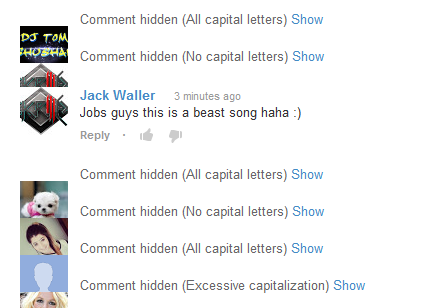 Blocked comments are hidden under a collapsible section. A click on the Show link reveals the hidden comment.

CommentBlocker for Chrome goes one step further and hides all comments on all websites regardless of whether they contain profanities or not. The extension hides the entire comments section under an overlay, but if you wish to see them you only have to click on the overlay once.

The identically named (but from different developers) CommentBlocker for Firefox functions just like its Chrome counterpart – it blocks all comments. When comments get blocked an icon appears inside the address bar which you can click to toggle the comments on and off. There is support for blacklist and whitelist for websites, letting you decide what to filter out and what not to.

Do you get bothered by foul language? How do you manage or react when you encounter them on the web?