The SETI Institute has just opened a public poll to decide the names for two newly discovered moons of Pluto. The moons are currently orbiting the former planet with drab names of "P4" and "P5," indicating that they are the 4th and 5th discovered moons, but will eventually be named after characters in Greek or Roman mythology following traditional naming convention. Mark Showalter, senior research scientist at the SETI Institute’s Carl Sagan Center, who found the moons using the Hubble telescope, opened a web site yesterday calling netizens to cast their votes against 12 chosen names. So far the response has been phenomenal. 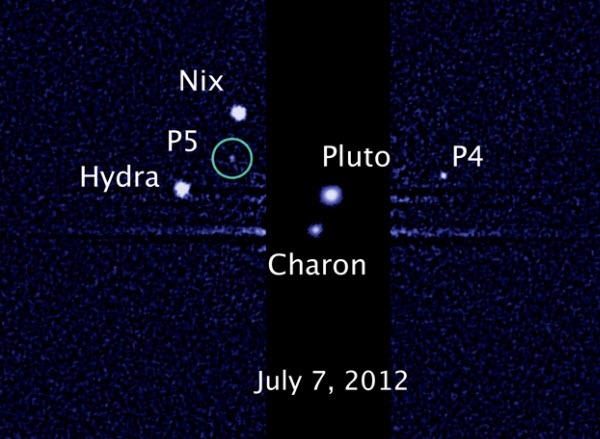 The website for renaming P4 and P5 also offers a write-in ballot for those uninterested in the current selection, but the Showalter says any proposed names "must come from Greek or Roman mythology, and must be related to Pluto/Hades and the underworld." The names of the other three moons orbiting Pluto — Charon, Nix, and Hydra — also originate from characters in Greek mythology.

Submitted names will be reviewed by the team and could be added to the ballot. Interestingly, the poll welcomes you to cast more than one vote on your preferred name but implores you to restrict your votes to once per day. Voting will end on February 25, 2013. The final names will be announced after their formal approval by the International Astronomical Union.

At the time of this writing, more than 90,000 votes has been cast with “Cerberus” and “Styx” leading the tally.

P4 was discovered in 2011 in images taken by the Hubble Space Telescope. P5 was discovered a year later during a more intensive search for previously unseen objects orbiting the distant, dwarf planet. The moons are only 20 to 30 km (15 to 20 miles) across. Currently, Pluto is receiving special scrutiny by astronomers, because NASA’s New Horizons spacecraft is slated to arrive there in July 2015.