When Google announced the shocking news of the impending death of Google Reader, the angry reactions that followed on social media, blogs, and the Internet in general, had one interesting side effect – it increased awareness about RSS. Many people, who had never heard about RSS before, discovered a new way to follow their favorite websites, and hopefully are enjoying the freedom to read articles at their own pace and time (as opposed to real-time updates on Twitter). I think this is a good time to look at some of the best RSS feed reader add-ons available on one of the most popular web browsers – Firefox.

Feedly was already an immensely popular alternative, even before the death of Google Reader was announced. Now it is poised to become the most popular online feed reader app. Previously, Feedly was just a glorified front-end to Google Reader, it still is, but as Reader is shutting down, the Feedly team is preparing to host all their users’ subscription on their own servers. Recently, Feedly also made several improvements to their reader app to help ease the transition from Google Reader to Feedly. The app itself is aesthetically pleasing, but slower than Google Reader. There are multiple viewing modes including titles and magazine type of layouts. You can sort feed items by date or alphabetically, mark as favorites, organize feeds into folders, and change themes. As Feedly is being actively developed, expect to see more new features in coming weeks.

Brief integrates with Live Bookmarks – the existing feed reader for Firefox. Brief takes all subscriptions in Live Bookmarks and presents it in a more functional and practical manner.

On the right you can see the list of subscriptions, and on the left is the expanded view of the feed selected. You can mark feed read or star important one. You can also choose a more compact view by displaying only the headlines, or view only unread items or the bookmarked ones. There are also plenty of shortcuts for the keyboard junkies out there. 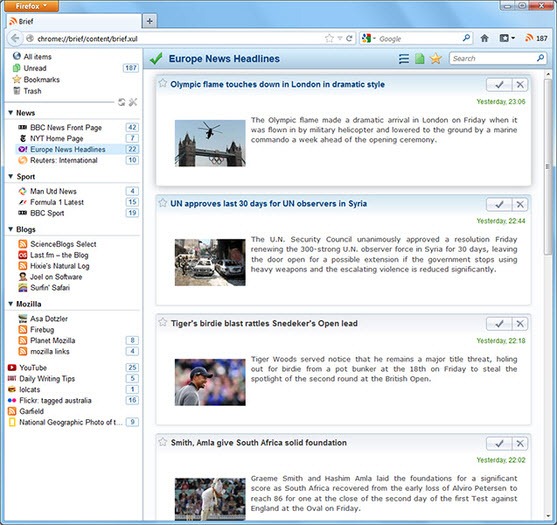 There is a search box that allows you to quickly search through your subscribed feeds. An icon in the toolbar shows the total number of unread items.

Other features include the ability to specify the time interval of feed update, automatically remove items after a certain period of days, feed sorting order etc.

Bamboo Feed Reader is a simple no-nonsense feed reader extension for Firefox. It’s not very pretty to look at but it does the job.

On the top left corner you’ll find several options to change display view between lists and content view, a filter to show all items or only unread items, a filter to show only your favorite items, and a search. These options can also be accessed through keyboard shortcuts. Beneath the options box are your feeds, organized by folders, as they appear in Live Bookmarks. You can subscribe to new feeds by entering the feed URL or by importing an OPML file of your feeds. In List view mode, you can hover over an item to get a preview of the post. 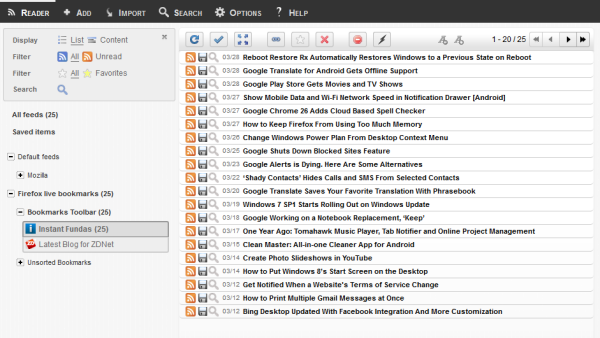 The reader is fairly customizable, for instance, you can allow or disallow embedded content, open YouTube videos in a pop-up, use cache images, adjust font-size on the fly, and limit the number of displayed items. There is an integrated ad-blocker too that removes advertisements from feeds.

Only 3 add-ons? Unfortunately yes. There are other RSS add-ons that I deliberately left out, including a moderately popular one called Sage. The reason is that Sage is not compatible with Firefox 20. Other RSS add-ons are merely tickers that are good for keeping track of one or two feeds maybe, not hundreds. Besides, there are better desktop RSS tickers programs to choose from.

Do you have a favorite RSS add-on not featured here?