GM-UniversalSync is a simple, free file synchronization software that allows users to keep two or more folders in sync with each other. The folders can reside either in a local system, on a network, on removable drives or on a remote server. When on a remote server, the program syncs over FTP and WebDav protocols. GM-UniversalSync doesn’t synchronize in real-time like most cloud backup services do, but has a powerful built-in scheduler that can be configured to run tasks periodically, effectively turning the program into near real-time file synchronizer. The program supports filename filters that allows user to include or exclude certain file types, error action and a system that lets users choose the direction of the sync.

GM-UniversalSync’s strength lies in its simplicity. It is very easy to setup folder synchronization with just the basic settings loaded. The program is extremely small – less than 600KB in size – and very light on resources. 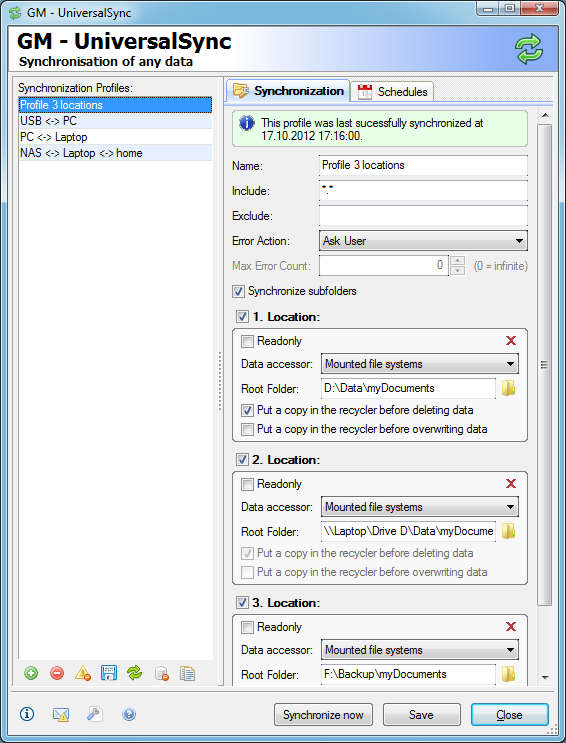 To create a new task, click on the green “+” button. Enter a name for the profile, set file extensions to include in the sync and files to exclude, choose how you want the program to handle sync errors, maximum error counts and time tolerance.

To include all files, the include filter is already set to *. Here you can enter specific file types such as *.doc or *.PDF. The same goes to the exclude filter. You can also choose to include or exclude sub-folders from the sync task.

You can add as many locations as you want including FTP and WebDAV servers. The WebDAV support makes it possible to use GM-UniversalSync as a client for cloud backup services that offer this protocol, such as Box and maybe even Dropbox in future. The program doesn’t currently support SSL connections, but this feature is reportedly in the roadmap. 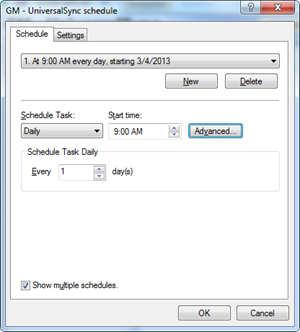 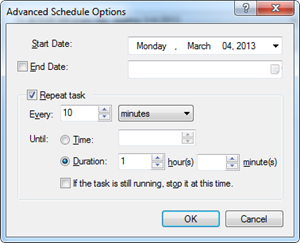 The scheduler offers plenty of functions to fine tune how your tasks run. Tasks can be scheduled to run daily, weekly, monthly, at system startup, and at logon at a specified time, or when the computer is idle. Tasks can also be run at particular dates or between a particular period, and can be repeated every few minutes or hours.

GM-UniversalSync can run on all versions of Windows, right from Windows 98 to Windows 7, and possibly Windows 8 too.