One of the biggest complaints that we have been hearing about Microsoft’s new operating system is the limited support for multi tasking when using Modern apps. Windows 8 apps run only in full screen mode, with the possibility of running not more than two apps side by side, no matter how large your screen real estate might be. Even when running two apps at once, the screen is split asymmetrically; rather than offering equal screen space to both apps, the screen is divided in 2:1 ratio, so that one app gets more importance than the other.

Popular Windows customization software maker Stardock has now released a new software that allows users to break free of the limiting nature of Windows 8 by allowing Modern apps to run on the classic desktop inside a window frame. Users are no longer limited to two apps at a time. It is possible to simultaneously run as many Modern apps the user wants, as long as there is enough hardware resources available. 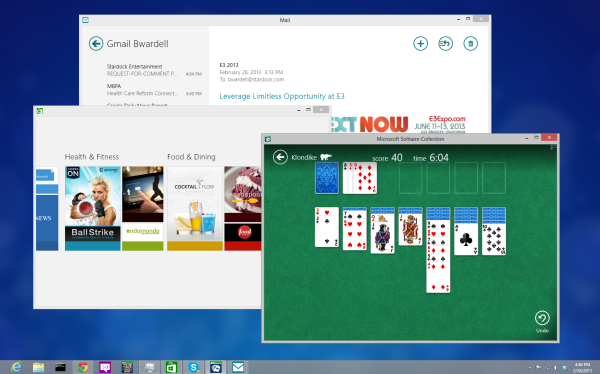 ModernMix thus solves not only the multi-tasking problem but the pesky little issue of “how do I close Modern apps?”. Just click on the red x button and it’s gone from the screen, and gone from memory. Surely Microsoft, you could have done that? 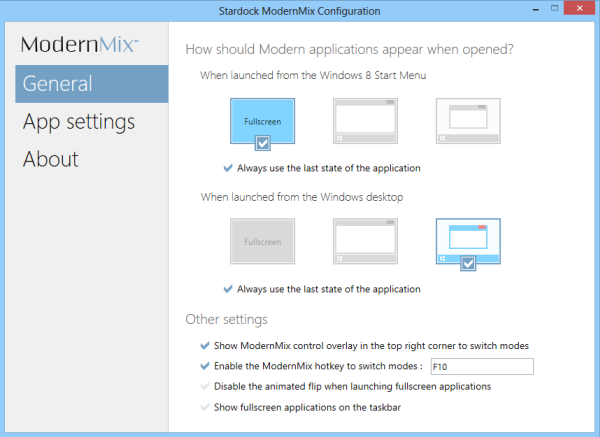 ModernMix also lets you configure, separately, how you want Modern apps to behave when you launch them from the start screen and from the desktop. For instance, you can set apps to run full screen when started from the humongous start screen and in window-mode when started from the desktop. For me, it’s windows-mode always. You can let the program remember the last setting, that is, if you ran the Weather app full screen the last time, it will always run full screen regardless of where you launched it from. This can cause some annoying issues though, like some apps getting stuck in a particular mode. You can then force these apps to a particular mode under “App settings” in ModernMix.

Want to quickly switch view? Sure you can do that. Hover the mouse button at the top-left of the app window to reveal a small switch icon, then click. Alternatively, you can hit the F10 key.

Like all Stardock products, ModernMix is not free. The program is priced at $4.99, but it’s a fiver it well deserves. A 30-day trial version is available for you to checkout the program before you decide to spend.