The Microsoft SkyDrive desktop client is not supported in Windows XP. It’s probably right, because Windows XP is really old and Microsoft should be doing everything possible to dissuade people from using the operating system. But it’s still not fair to the millions of users who couldn’t upgrade for one reason or the other. Old hardware is a valid reason. So, if you have an old PC with Windows XP and you really need to have SkyDrive on it, here is how to do it.

syncDriver is an excellent third-party SkyDrive desktop client for Windows, that works on Windows XP and above. It makes no compromises on features that is available on the official client, instead adds a couple of its own. Support for older version of Windows is just one. Other commendable features include better transparency – clear status and progress report, support for proxy servers, support for multiple accounts and the ability to choose file sync direction. 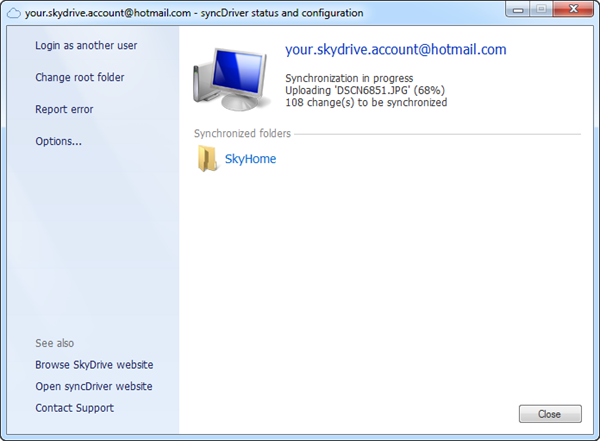 (Even through the screenshots show a Windows 7 system, the program is identical on Windows XP.)

syncDriver maps a local folder of your choice to the SkyDrive root directory and keeps these two in sync. Whenever a file is modified locally on your computer, it gets uploaded to SkyDrive. If a file is uploaded or modified in SkyDrive, syncDriver notices that and downloads the file. And just like the official SkyDrive app, syncDriver supports selective sync where you can choose folders within the SkyDrive root folder that you want to synchronize with your local folder. syncDriver is not just for Windows XP, it is a fine replacement to the official program for Windows 7 and Windows 8 as well.